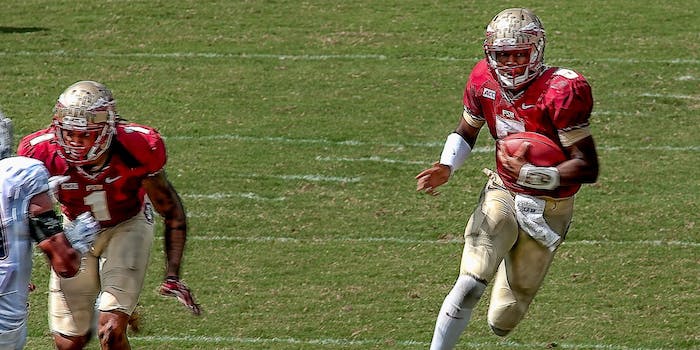 Controversial QB Jameis Winston visited the team that will pick No. 1. So why did it tell the entire world?

Potential No. 1 overall NFL draft pick Jameis Winston took a visit this week with the Tampa Bay Buccaneers—the team that happens to hold the No. 1 overall pick. And if you didn’t hear about it beforehand, the Buccaneers online team wanted to make sure you heard about it afterward.

Winston interviewed at the team facilities on Tuesday, and the Buccaneers’ official media outlet was all over it. Team reporter Scott Smith posted video of an interview with the former Florida State star and unveiled a slideshow of Winston’s visit that featured 20 photos of him touring the locker room with general manager Jason Licht and meeting the strength and conditioning coach and hanging out with receiver Vincent Jackson.

This kind of coverage for the potential No. 1 pick to the No. 1 picker appears to be unprecedented. NFL teams usually employ some of the most paranoid members of our society—football coaches—and they usually try to shut out reporters and fans like they’re protecting state secrets and nuclear codes. But Tampa Bay, at least in this case, opened wide its doors and let the public listen to Winston say things like, “I just want to be the face of this franchise” and “I believe this place—I would love to be here.”

My question is this: why? Smith didn’t respond to a message by the Daily Dot, but luckily, I have three theories.

1) The Bucs are testing the PR waters

Though Winston won the Heisman Trophy for the 2013 season, led the Seminoles to a national title, and made himself into college football’s biggest star, he also was college football’s most controversial athlete. He has been accused of sexual assault, and he’s had a variety of other off-field issues, including allegedly stealing crab legs from a grocery store and yelling misogynistic obscenities in the middle of campus. That said, Winston potentially can be an NFL superstar. And he played college ball in Tallahassee, Fla. A Winston pick could be controversial, and maybe the organization is trying to get a sense of just how controversial that selection would be among its fanbase. Objectively speaking this would be a terrible idea, because making a pick based on fans’ input rarely is a path to success.

2) The Bucs will absolutely take Winston No. 1

Two months before the draft, it’s impossible to say this with certainty. Players still will participate in their collegiate pro days, and teams will do as much research as possible on every potential draftee. Winston’s stock could rise or fall. But it’s also true that Tampa Bay—which released Josh McCown and which reportedly wants to trade Mike Glennon—are badly in need of a starting quarterback. Winston happened to be a pretty darn good one in college.

Much of the information that’s leaked to the media and fans in the runup to the draft is, to put it kindly, complete and utter BS. Perhaps Tampa Bay wants everybody to think that they’re in love with Winston and that there’s no doubt the team will draft him. Maybe that’s because the Buccaneers, in reality, want to give that impression so another team that’s also in need of a top-notch QB—and in this draft, only Winston and Oregon’s Marcus Mariota meet that criteria—will offer the Buccaneers a tremendous opportunity to trade away its No. 1 pick. Perhaps all of this coverage was an exercise in reverse psychology.

The reality: I messaged with a Tampa Bay-area media member on Tuesday, and while we agreed the Buccaneers’ overabundance of Winston coverage was a little strange, my Twitter buddy said this probably had more to do with beginning the PR push of Winston as the face of the franchise two months before the draft.

Or maybe the team really is interested in becoming more transparent—which, again, would make it part of a tiny minority in the NFL.

If that’s the case, bravo. But because this is the NFL—the land of misdirection and smokescreens—it’s hard to buy that completely. Either way, this is what we know for sure: Jameis Winston visited the Buccaneers this week, and they let their fans know all about it.