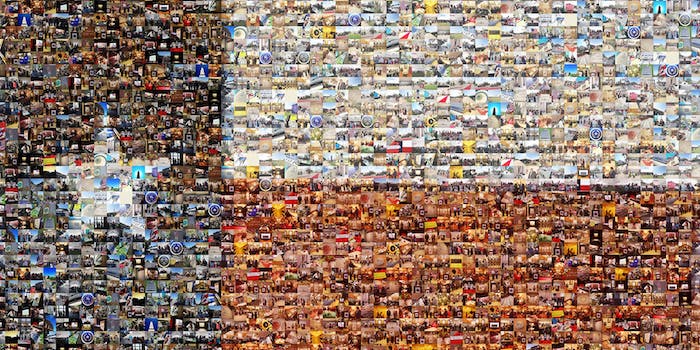 The Jade Helm controversy illustrates the racist double standard when it comes to communities of color.

At the end of April, a group of some 200 Texas patriots in a town called Bastrop stood in the way of a possible takeover by the United States military. “They’re gathering intelligence. That’s what they’re doing. And they’re moving logistics in place for martial law,” Bastrop resident Bob Wells told the Austin-American Statesman.

Indeed, images of police militarization and state-sanctioned violence against communities of color have permeated through global livestreams.

Lastoria informed the group that the exercises were routine, although unique in their size and scope—the simulations will take place in six other states where the terrain would replicate the conditions in foreign territory. “The terrain is very challenging and it’s going to make our soldiers sweat, and sweating in peacetime is what we want because it’s going to reduce the bleeding in wartime,” Lastoria told the Statesman.

Not one to simply accept a milquetoast statement from a puppet of the federal government, Texas’ governor, Gregg Abbott, dispatched the unarmed Texas State Guard to closely monitor the routine exercises. “It is important that Texans know their safety, constitutional rights, private property rights, and civil liberties will not be infringed,” Abbott wrote.

The fervor in Bastrop stems from Internet reports of suspicious Wal-Mart prisons, ISIS camps outside El Paso, imported guillotines for mass executions of Obama’s critics, and train cars equipped with shackles. This all seems far-fetched, but let’s hear them out.

“It’s the same thing that happened in Nazi Germany,” Bob Wells continues. “You get the people used to the troops on the street, the appearance of uniformed troops, and the militarization of the police.”

Indeed, images of police militarization and state-sanctioned violence against communities of color have permeated through global livestreams beginning with Ferguson, Mo., last August and continuing through the unrest in Baltimore, even making their way into reports by TV news organizations like CNN.

Maybe Bob Wells is on to something. After all, the Washington Post reported Tuesday the presence of FBI surveillance drones over areas of Baltimore affected by the unrest. So what did Bastrop residents have to say about all of this?

Whenever anything that remotely resembles anything white, right-wing conspiracy theorists—which often overlaps with the “Don’t Tread on Me,” “Come and Take It” brand of Texans—affects people of color, there’s never the faintest hints of an uproar. The Jade Helm controversy illustrates the racist double standard when it comes to the police abuse and increased militarization communities of color face.

Whenever anything that remotely resembles anything white, right-wing conspiracy theorists affects people of color, there’s never the faintest hints of an uproar.

Conspiracy theory news sites hellbent on exposing the Globalists aggressively taking over the world through aggressive, military force—and old French execution methods—gloss over the problems in places like Baltimore and Ferguson, insisting that it’s not about race.

“The elite know Revolution’s here,” Alex Jones says on his InfoWars website. “They won’t make it a peaceful, happy revolution to restore the republic. They want to make it racial. And I’m not going to be a part of it.” (InfoWars recently published a piece exposing “black crime facts,” in order to justify officer involved shootings.)

It should come as no surprise that conservative extremists make no effort to acknowledge the massive civil rights abuses by police forces nationwide. As Conor Friedersdorf writes in the Atlantic, “the vast majority of commentary of Baltimore in right-leaning outlets is myopic and the blindspot is nearly always the ugly reality of bad policing in America.”

Outlets like InfoWars, however, seem to make constant reference to a growing police state in the United States. Unfortunately, Alex Jones and his ragtag team of revolutionaries seem to be unwilling to recognize when the closest thing to what they allege actually happens in communities of color. They instead cite racial activism as a divide and conquer technique by “Globalists” like Henry Kissinger, George Soros, and Ted Turner, according to Jones.

Yet somehow the National Guard always gets called when protests break out in African-American neighborhoods when yet another unarmed black man is shot, as opposed to when crickets chirp as white people riot over…surfing.

One prominent fear within the Jade Helm discourse revolves around the mass incarceration of dissenters. Wal-Mart locations in states used in the Jade Helm exercises have apparently closed for dubious reasons, according to Dave Hodges, host of The Common Sense Show, an internet radio program that aims to free America “one enslaved mind at a time.” Each Wal-Mart will “undoubtedly” serve as “processing centers for FEMA camp political prisoners,” Hodges claims.

This claim, however, says nothing of the existing mass incarceration in the United States. As I previously wrote for the Daily Dot, due to “tough-on crime” stances, the War on Drugs, mandatory minimums, and “three strikes” laws, American prisons are filled with non-violent offenders, giving it the highest prison population in the world.

The Jade Helm controversy illustrates the racist double standard when it comes to the police abuse and increased militarization communities of color face.

America’s people of color are already in prison, but of course, modern incarceration culture isn’t on Bastrop’s mind. The U.S. is only a prison state, apparently, if white people think they’ll be imprisoned.

To Jade Helmers, President Obama’s apparent soft stance on ISIS is indicative of his involvement with the extremist group, who are now camped outside of El Paso in Ciudad Juarez. The Common Sense Show, however, reports that “Jade Helm extractions and martial law will follow the coming ISIS incursion and ISIS activities will be used as a cover to begin extractions. If there is another interpretation, I have not seen it.”

ISIS, simply stated, is not in Mexico. Since September 11, the U.S.-Mexico border has been the focus of numerous security measures and rapidly increased militarization, especially during the Obama Administration. According to the National Network for Immigrant and Refugee Rights, the 2013 Migration Policy Institute report found that “the amount spent on border enforcement and immigration in Fiscal Year 2012 (nearly $18 billion) surpassed the combined budget of $14.4 billion of all other federal law enforcement agencies.”

This has had a staggering effect on Latino communities in the borderlands, who are constantly the victims of abuse and racial profiling by Border Patrol agents. Regardless of citizenship status, borderland residents are subject to harassment for their “papers” on a day-to-day basis, even as far as 100 miles inland.

Anything resembling theories of a police state, military occupation, and mass imprisonment already exist in POC communities across the U.S. The fact that Jade Helm truthers are unaware, uncritical, or even approving of this idea exposes the unsurprising racism that exists in these criticisms. Maybe if they were able to show any hint of awareness of these systems of power at play in communities of color, then maybe it’d be easier to swallow their tripe.

But as it stands, these are just a group of crazy white folks shaking in their boots because they are afraid their black president is going to knock down their doors and take their guns. That will never happen—or maybe that’s what they want us to think.

Photo via Texas State Library and Archives Commission/Flickr (CC BY 2.0)