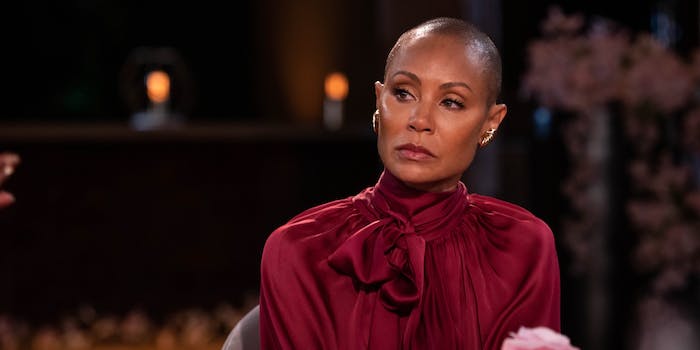 She hopes that Will Smith and Chris Rock are able to reconcile.

More than two months after Will Smith slapped Chris Rock at the Oscars, Jada Pinkett Smith is addressing the incident on Red Table Talk, the Facebook talk show she hosts with members of her family, as part of a larger discussion on alopecia.

It was Rock’s joke about Pinkett Smith—who has alopecia, an autoimmune disorder that leads to hair loss—that led to Smith coming on stage during the Oscar ceremony. And while Smith has apologized on multiple occasions, Pinkett Smith has mostly remained silent about what happened apart from an Instagram post that alluded that Red Table Talk would talk about it eventually.

That discussion came on the June 1 episode of Red Table Talk, which Pinkett Smith kicked off by letting her audience know that “this is a really important” episode about alopecia, noting that thousands of people reached out to her after the Oscars to share their own stories about alopecia.

“I’m using this moment to give our alopecia family an opportunity to talk about what it’s like to have this condition and to inform people about what alopecia actually is,” she said.

The majority of the episode focuses on alopecia in a series of discussions with people who have it or have been affected by it, offering viewers a window into an autoimmune disorder often associated with shame. But Pinkett Smith also briefly addressed the Oscars fallout by referencing both Smith and Rock (the latter not by name) as she expresses her wish for them to “heal, talk this out, and reconcile.”

“Now, about Oscar night, my deepest hope is that these two intelligent, capable men have an opportunity to heal, talk this out, and reconcile,” she continued. “The state of the world today, we need ’em both, and we all actually need one another more than ever. Until then, Will and I are continuing to do what we have done for the last 28 years, and that’s keep figuring out this thing called life together. Thank you for listening.”

You can watch the full Red Table Talk episode below.