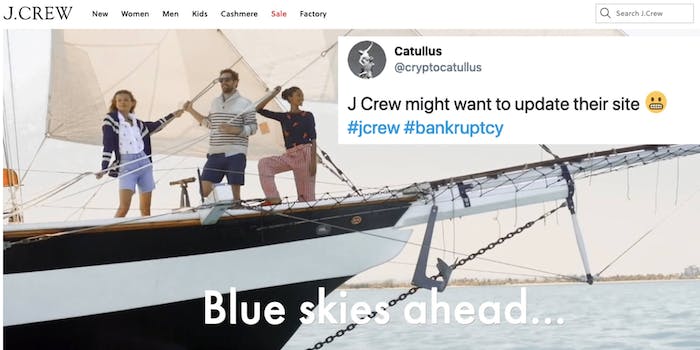 'My decades-long war against J. Crew is over...'

J. Crew, the stalwart of preppy attire for going on 40 years, filed for bankruptcy on Monday, becoming the first major retail chain casualty of the coronavirus pandemic. The move comes after the company was forced to temporarily close all 492 of its J. Crew and Madewell stores. Rumblings of the impending filing had already begun last week ahead of the official announcement.

Chief executive Jan Singer commented on the news in a company statement, writing that the Chapter 11 agreement represents a “critical milestone” in the ongoing process to transform the business, with “the goal of driving long-term, sustainable growth” for J. Crew while continuing to enhance Madewell’s momentum.

This news should hardly come as a surprise since J. Crew had been dealing with its fair share of problems for the better part of a decade—even before the virus forced retail closures across the country. Amid a struggle for relevancy, in 2011 the company had undergone an acquisition by a couple of private-equity firms in a leveraged buyout, which—combined with declining sales—left it nearly $2 billion in debt.

Despite the aforementioned reassurances from Singer and Ulrich, things are looking, like, bad. Really bad. While J. Crew may not go completely out of business next week or even next month, it remains to be seen how long the retailer will be able to suss it out. It’s the end of an era for sure, however, after the news broke, many people on Twitter were not exactly sympathetic to the brand.

Though, not everyone was pointing and laughing. (*cough, cough*) Some of us still have a special place in our hearts for J. Crew—particularly their pretty sweet sales that, looking back, were probably a harbinger of things to come.

But hey, on the bright side, did we mention the sales??

Enjoy your closeout gingham dresses and linen shorts, vultures. If you need us, we’ll be pouring one out … from a bottle of Sofia Brut Rosé sparkling wine, naturally.