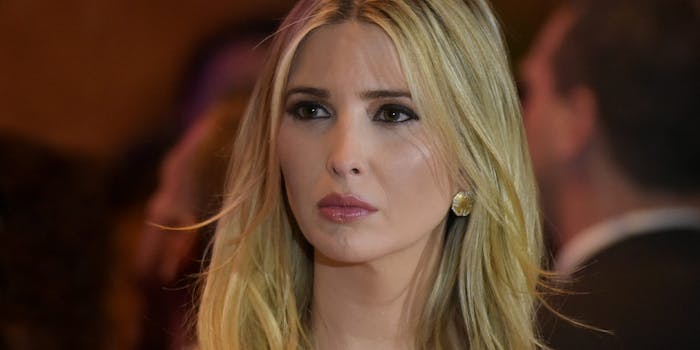 Photo via a katz/Shutterstock (Licensed) Remix by Jason Reed

Ivanka's use of language ain't the greatest.

Although President Donald Trump entrusted his business operation to his two sons after he was elected, he placed even greater faith and responsibility in his daughter, Ivanka. As a senior adviser to him, someone—possibly the only person—the president completely trusts, she is partially responsible for his legacy in American history.

But does she know what she’s doing? Well… this presidency hasn’t exactly lit the world on fire so far. Which, hey, it’s hard to make the transition to Washington, D.C. But at least Ivanka knows what words are and how to use them, right?

A Twitter thread by a Vice politics editor Eve Peyser shows Ivanka may not have the best grasp of even that fundamental block of language.

a running list of words Ivanka Trump doesn't know how to use: relative, albeit pic.twitter.com/IHg2xFcI1E

“Relative” is tortured in that sentence there. Properly, she should have said I try to keep my hours “relatively short.”

Ivanka’s use of “albeit” is not as bad, but it comes across extremely clunky. And if those two were her only botched moments, we wouldn’t think much of it. But there was her infamous “otherwise” moment.

“Otherwise,” of course, means except or excluding, so she was implicitly shading her nephew.

Then there was the time she messed up the use of “complicit.” That was a complete disaster.

“Juxtaposition” here is fine, but it’s not great.

There really isn’t such a thing as “cultural overlay.”

weird use of "overlay," Ivanka pic.twitter.com/F1nuC9mSIF

But where she struggled tremendously with was “Happy Birthday.”

throwback to when Ivanka didn't know how to correctly use "happy birthday" pic.twitter.com/rnf2xzDpr1

Yep. That is not what “birthday” means.

Ivanka’s grasp on the English language doesn’t really matter, though. Her father has already said he has the best words.