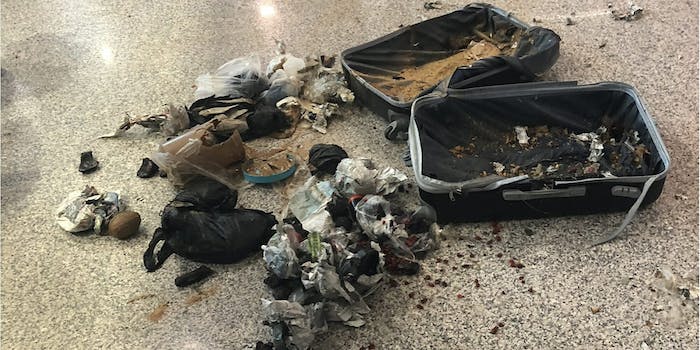 Italian police fear bag is filled with bombs, blow up coconuts instead

The whole situation is nuts.

Imagine this: You’re waiting to board your flight at Leonardo da Vinci–Fiumicino Airport in Rome, Italy, when police block passengers from going past security because there’s a suspicious package in the airport. So, as one does, the police proceed to explode the bag in front of dozens of passengers—only to find out that it’s filled with coconuts.

That’s exactly what happened Monday while freelance journalist Ned Donovan was set to board a flight in Rome. After arriving at the airport around 1pm, Donovan tweeted photos of the incident as it happened, which quickly went viral.

“I’d just arrived at the airport by train, and I saw there was a huge crowd in the concourse of Terminal 3,” Donovan told the Daily Dot. “Some Italian police were trying to wave people away from a scene behind tape but weren’t really trying very hard. No one was being allowed to walk in and they’d closed the security/entrance to the airside part of the airport.”

Afterward, police brought out a water cannon and blew up the bomb just a couple dozen feet away from passengers, “which is when all the coconut bits flew everywhere,” Donovan explained. From there, he says the Italian police simply “wandered off and left the bag there and let everyone go through security again.”

It didn’t take long for Twitter to hop in on the coconut-themed punnery.

🎶 They put the bomb in the coconut and blow them all up. 🎶

Is that a weapon of mass desiccation?

It was a lovely bunch of coconuts pic.twitter.com/EddT9epFFn

I can only imagine how awesome that airport smells right now

Love this story so much. Plus, coconuts can really go, um, nuts in the heat/explosion stakes. I know this because I’ve genuinely done a story about the problems caused by coconuts in coffins at crematoria.

Can you be on the government-exploded coconuts beat full time?

The “nuts” jokes practically write themselves.

So, clearly there’s a lesson to be learned here: When in Rome, do not leave your nuts unattended (or they’ll be exploded).

Most bizarre of all, some Twitter users wonder why the Italian police exploded a suspicious package right in front of passengers. If a deadly chemical weapon was inside, wouldn’t detonating it in the middle of an airport expose dozens to potential toxins? As Donovan told the Daily Dot, it really was “all a bit of a shambles.”

They blew it up inside the concourse?

Just as well it wasn't full of semtex then.

The best way to make sure it's not an explosive device that'll explode in the airport, is to blow it up inside the airport ? Um… Can't you just drag the thing out with a robot ? https://t.co/KtwsurSscq

There’s a lesson to be learned here: When in Rome, keep your coconuts at home, lest the police explode them and send them flying everywhere.