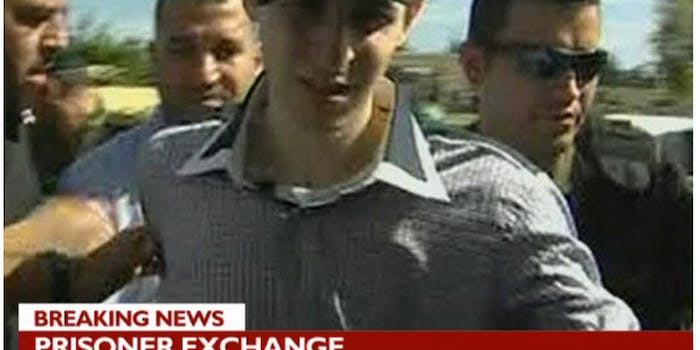 An Israeli soldier was released in a prisoner swap with Palestinian authorities.

After more than five years of being held captive by Hamas, Israeli soldier Gilad Shalit was released today as part of a prisoner swap between Israeli and Palestinian authorities.

Shalit was greeted by supporters, flanked in Israeli flags, in his hometown of Mitzpe Hila, a small village in northern Israel.  In exchange for Shalit, Israeli authorities released more than 1,000 Palestinian prisoners. Those prisoners were also greeted with celebrations.

He was captured in 2006 by Hamas militants near the Israeli-Gaza border when his unit came under attack. During the five years he was held captive, he had no contact with friends or family and was denied access from aid groups.

Support on social media for Shalit has grown over the years. A Facebook page dedicated to his release has more than 300,000 likes with nearly 8,000 people talking about his release. Another page on Facebook, which is his Wikipedia entry, has nearly 9,000 likes.

Over on Twitter, Shalit’s name was mentioned more than 26,000 times in the past day, according to social measuring website Topsy. BBC’s picture of Shalit is the most circulated picture of the solider and viewed more than 18,000 times on TwitPic.

We compiled a Storify of the world’s reactions to Shalit’s release.

Picture by BBCNews via TwitPic