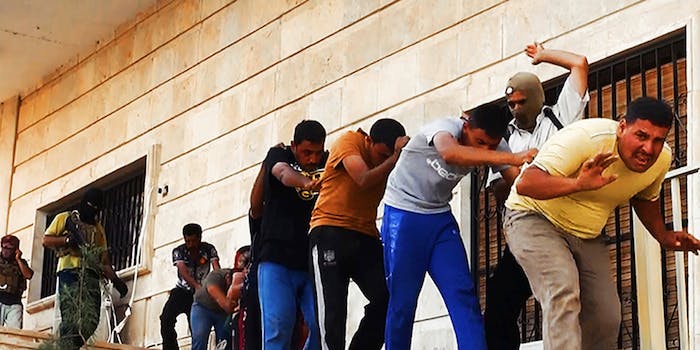 They were sending thousands of tweets an hour.

Last week, as an army of Sunni jihadists sacked Mosul, Iraq’s second largest city, and claimed a mass killing that has the potential to ignite a firestorm in the region, the conquerors showcased a digital weapon in their arsenal that powerfully complemented their rifles and rockets: Twitter.

The Islamic State of Iraq and Syria (ISIS), now the de facto owners of much of northern Iraq and Syria, live-tweeted their rapid advance into the heart of what was until recently an U.S.-occupied country. Countless tweets were sent out to tens of thousands of followers using automated apps in order to maximize visibility.

ISIS deployed its Twitter app to max extent when taking Mosul, and it’s ramping up again, 3,000 tweets in 30 minutes pic.twitter.com/Ccl11eAb1S

The heavy social media activity of the new Iraq war follows the widespread use of YouTube, Facebook, and Twitter throughout the Syrian civil war. Rebels in that country, which directly borders Iraq on the west, have used the Internet to recruit, organize, fundraise, and even strategize in the heat of battle.

ISIS are Internet-savvy veterans of the Syrian civil war who know how powerful the Web can be. Despite the American intelligence community’s recent failure to adequately penetrate the group, ISIS has proven successful at reaching a global audience with their message.

ISIS made their most talked-about social media play of all time this weekend when they claimed to have slaughtered 1,700 Iraqi Shiite soldiers.

The Sunni militants posted dozens of photos on Twitter that chronicled the incident. Shiites were bound, packed into trucks, laid down into ditches, and shot in mass. The entire process, which has yet to be confirmed by independent sources, seems to have been well-documented and promoted.

If in fact 1,700 prisoners were killed, it would make for an atrocity that would outstrip anything that has happened in the Middle East for years, eclipsing even the Damascus gas attacks in the Syrian civil war.

“ISIS has clearly made the determination that atrocities help it more than they hurt it,” researcher J.M. Berger said in reaction to the photos, noting that the group has specifically chosen to publicize these actions right after the fall of Mosul made ISIS the most talked-about militant group in the world.

“The filthy Shiites are killed in the hundreds,” one ISIS tweet said. Other tweets mocked the victims as well as Iraq’s government and its Shiite majority.

As the Iraqi government pointedly questions the authenticity of ISIS’s bloody claims, the broader consequences of the killings in the Islamic world, and in Iraq in particular, remains to be seen.

@intelwire In the immediate future, it will probably inspire new recruits. Longer term, it will demonstrate to Muslims the brutality of ISIS

#Iraq began trending on Twitter last week and has kept a top spot ever since, as violence has continued to consume the country. Multiple official ISIS accounts have been suspended by the Twitter, and the Iraqi government has instituted a widespread block on social media in the country, and shut off Internet access altogether in five confict-torn regions.

The conquerors’ calculated Twitter strategy meant that searching for news on the war led directly to ISIS posts, photos, and ominous promises that the violence would not end until Baghdad had fallen.

Thanks to the ISIS Twitter app blasts, searching for Baghdad on Twitter gives you ISIS threats as first results pic.twitter.com/5bIMgzTU0C