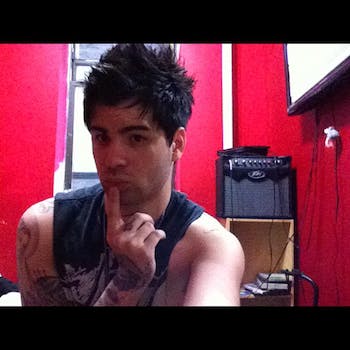 The Web site Is Anyone Up gained noteriety for posting people's nude photos without permission. Surprise: Not everyone objects.

Harlow McAlister never consented to her nude photos being posted on Is Anyone Up (most links are NSFW, not safe for work).

In fact, that’s Is Anyone Up’s whole premise: Someone sends in a naked picture of a person (often pornographic in nature) and Hunter Moore, who runs the site, posts it—without seeking permission from the person in the photo. And he links the photos he receives to the person’s publicly-available Facebook or Twitter page.

But while many object to having their photos posted, not all mind. In fact, some seem to like it. (Including Moore, who’s pictured above.)

McAlister had posted the photos of herself on Tumblr for “Topless Tuesday,” she said. “They were on my tumblr for about an hour a while back. I removed them and all of a sudden they resurfaced on IAU.”

But it didn’t bother her.

McAlister had actually submitted other people’s photo so she thought her picture being posted was “karma… It wasn’t of cruel intent. It was funny!”

The implication is that pictures are sent in by jilted ex-boyfriends and girlfriends. It doesn’t hurt that Moore gleefully posts complaints by people who want him to take photos down (he doesn’t).

But of the 40 or so people on the site that the Daily Dot attempted to contact, the majority either didn’t respond or had deleted their Facebook or Twitter accounts. Of those who did, though, most were nonchalant. (It’s possible that some had submitted their own photos, which Moore  encourages.)

“I thought it was pretty funny,” added Caleb Weathers. “Entertaining to say the least.”

Shane Coats also thought it was “funny,” he said. “I am 100% comfortable with my body, and really don’t care who sees it. Also, as a musician I suppose it’s pretty good publicity. Lolz.”

McAlister added, however, that she knows the site can be harmful.

“People can be hurt in the process of course, but that depends on the type of person you are,” McAlister said.

One example is a woman who, while well-known on the site, will remain nameless in this story at her request. The site shows a single nude photo of her, accompanied by a few of her Facebook photos where she’s fully clothed.

“i sent the nude one to my ex-boyfriend a year ago,” she says. “i’ve never sent it to anyone else. NO i’m not okay with it being on there.”

She asked Moore repeatedly to take down the photo of her, she says. She stopped after he posted a screengrab of her third request, where commenters mocked it.

“It’s not right that they won’t take it down,” she says. “I’m a good girl that comes from a good family with a heart of gold. I’m not a dirty whore.”