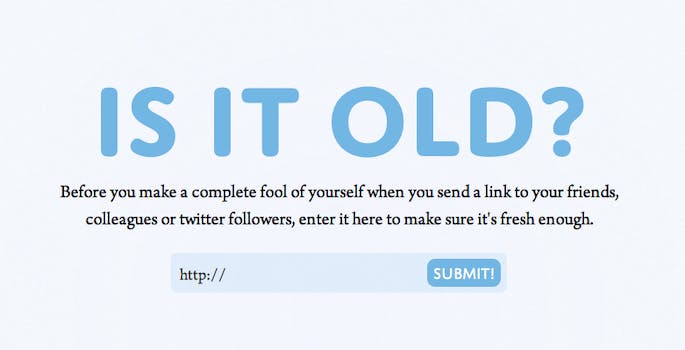 Is It Old? rescues you from sharing stale links

Worried you're about to tweet or Facebook something your friends have already seen? A new site warns you when a link is past its expiration date.

Like walking into a party wearing the same outfit your frenemy is wearing, sharing an old link can be embarrassing and distressing.

But a new single-serving website called “Is It Old?” aims to cure those troubling thoughts. The sleekly-designed website checks to how many times a link has been tweeted about to measure how fresh it is.

We think its best use is to measure the freshness of YouTube videos that you’re tempted to send to everyone in your address book. There’s nothing more depressing than linking your friends to that “you’re not special” commencement video and finding out that, on top of it being depressing, it’s very old.

So stop sharing that video of a baby panda sneezing, because the site described it as “dead.” It also dubbed the Sigur Ros video released on Monday, where Shia Labeouf gets naked, “old,” but the Bryce Harper mega video is still “kinda OK,” to share. Whew.

And we know this site is a good one to share since it describes itself as “mad fresh” when you enter it in the search box. Results for the Daily Dot, however, weren’t as cheery. It labeled us as “ridiculously old,” and said we’re starting to smell.

We’ll be finding some deodorant.

Photo via Is It Old?