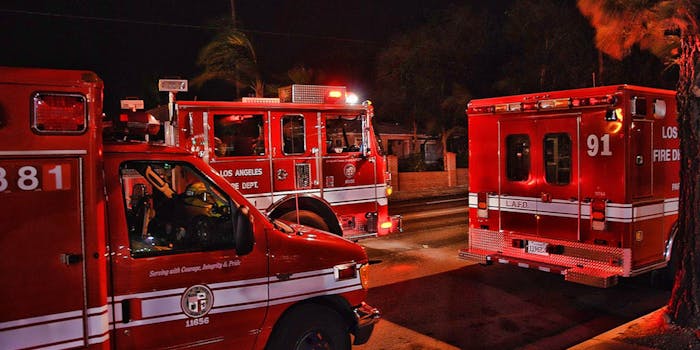 It started at around 3pm, although it’s hard to pin down the precise time, because it was a Sunday and I’d been reading quietly on the couch instead of glued to the Internet. I went to Instagram a funny cat picture, but Instagram wouldn’t load. I shut it down and restarted, turned my phone off and restarted, but still crickets. That’s when I noticed that my service had dropped to one bar with the dreaded “Extended 1x.” My email wouldn’t load, and neither would Twitter.

What was going on? I padded into the hall, where the wireless gateway was blinking frantically and uselessly. I spun in panic, desperately realizing that all my communications had been cut off.

Faced with such a traumatic situation, residents of the digital age have two options.

One is to do what I did: I walked across the yard to ask my landlords/neighbours if their phone and Internet services were working. It was a process of elimination approach; I found it suspicious that data services from two different providers were down at my house, so if theirs were down, too, it was a sign that something had gone catastrophically wrong.

Their Internet wasn’t working. Their landline was.

A friend somehow managed to get a text to me, asking if my Internet was down. That did it: Something was seriously wrong.

I fell into a sort of serene state, beyond anger, beyond confusion. It was obvious that, living in an isolated area as I do for a good chunk of the time, someone had messed something up somewhere along the thin, fragile line that connected us to the rest of the world, and until someone else fixed it, we would be cut off. I could go into spasms of rage, or I could just accept the inevitable and work the gossip network to figure out what had happened and when it would be fixed (long story short: a truck ran into some optical fiber, though we initially thought it was related to nearby wildfires).

The other approach is to do what countless people did when Facebook went down on Friday: they called 911. While Facebook rarely experiences global outages of this nature, it does happen, just as it occasionally happens to other major sites (remember how every time Gmail goes down for five minutes, we all act like the world is ending?). Facebook, like any other site, took steps to try to spread the word through every possible network that it was aware of the outage and working on it.

But users still apparently felt the need to call emergency services when they couldn’t load the site, browse through pictures of each others’ cats, and argue about President Obama. This raises the very obvious question of what truly constitutes an emergency (hint: not a Facebook outage) and how to get Internet users accustomed to the idea of exploring alternative options to calling emergency services. Such as checking Facebook’s Twitter account for status updates, or asking friends, or really anything other than calling 911, which is a dispatch service for critical, life-threatening emergencies. No, calling the non-emergency dispatch number isn’t an option either.

It’s not just because emergency services have absolutely nothing to do with outages or lack thereof—and, thus, will know nothing about them. Nor is it just that when users call them to demand information, they’re wasting valuable time that could be spent on things like dispatching ambulances to people having myocardial infarctions. It’s about a fundamental disconnect between reality and a sort of digital fantasy, where the inability to communicate for half an hour is viewed as some sort of critical emergency.

Our data outage lasted approximately 48 hours. During that period, banks couldn’t accept checks because their verification systems were down. Credit cards didn’t work, because businesses couldn’t connect their modems to service providers. Business effectively ground to a halt as residents staggered around in the street, fighting zombies off with now-useless Ethernet cables (I might be lying about something in the last sentence).

It wasn’t great. It was something that needed to be addressed, and it highlighted the issue that data service has become an important utility. Not on the level of electricity, which is used to run life support machines and perform other critical functions. Not on the level of access to clean water, which is necessary for hygiene and hydration as well as cooking. But important for economic stability and community safety—a friend and I wondered what would happen if the sheriff activated the Reverse 911 System, for example, when many people didn’t have working phones. Thanks to the ubiquity of the system, backups like tsunami sirens were no longer operational, and getting people to safety could have been difficult if there was an emergency.

This was a situation that could have turned very bad, and it didn’t. It did illustrate the dangers of putting all your eggs in one basket and eliminating or failing to retain backups and redundancies. But it wasn’t an emergency—although maybe no one called 911 because their phones weren’t working. (Although this could have been a problem for a genuine individual emergency, when people actually needed to call 911.)

While the Internet might be conceived of as a utility, 911 still isn’t an appropriate service to call about utility outages. That would be the utility itself. Even downed power lines should be reported to the electric company—unless they’re posing an immediate and present risk or starting fires, in which case 911 is still going to call the utility to address the problem.

A Facebook outage lasting all of 31 minutes, however, is definitely not an emergency. The fact that it was treated as such by panicked users is an illustration of the digital landscape we live in, one where constant connectivity and contact are viewed as musts. This is reflected in surprised and sometimes angry attitudes when people don’t respond to texts, emails, or calls immediately, when people aren’t up to date on the latest happenings on social media because they’re engaged in work, their offline lives, or simply taking a break.

What happens when you take a break from social media to be with yourself for a while? For those of us who routinely do just that, breaking out of the frenetic urgency of always being on, the idea of calling 911 to complain about a Facebook outage is laughable and tragic. But for those who live and breathe social media during every waking hour, what should perhaps be just one aspect of life has become a dire necessity, and this is a troubling development.