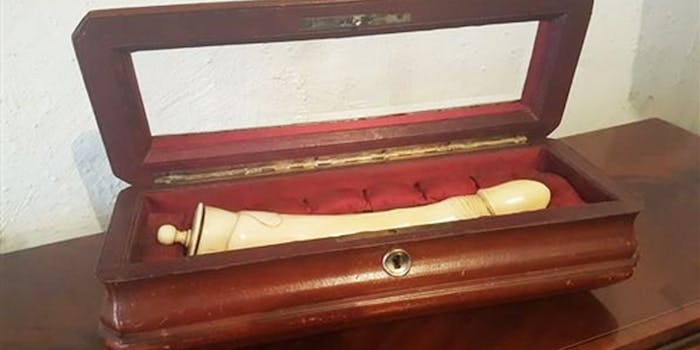 It is such an important piece of our Irish sexual history, but often times unless there's a connection to the Famine or 1916, really cool artefacts like these that give us a glimpse into the sex lives and humour of our ancestors are de-prioritised and forgotten.

“It was crazy, we had bids from museums, sex-shop owners, housewives, doctors–just mad,” he told the publication. “It is interesting in that it reveals practices from Victorian-era Ireland that we wouldn’t have known about.”

Please if you know someone who works in one of our national museums or the OPW or might have in interest in helping secure this thing temporarily till it finds a proper home in a museum, please tag them here. I don't want to risk it leaving Ireland again.

OK folks. The auction is in 90 minutes, so I don't have time to set up a crowdfunding campaign. What I'm going to do is if anyone wants to contribute to our bid, they can paypal me the money ([email protected]), and if we don't win, I'll refund everyone back.

If we do win this auction, I'll be looking into which museum it would best be suited to donate to. Tag your faves below. #HauntedDildoAuction

And then, it was on like Donkey Kong, with the hashtag HauntedDildoAuction:

Ok with regards to how the donation money will be used:

If we lose, obviously all donations will be sent back via Paypal.

If we win, I start phoning museums.

Needless to say, those who had been along for the ride were ecstatic with the happy outcome.

Omg yes of course! That would be amazing!

I would totally love to donate it to you, but as it's a piece of Irish history, I want to try to keep it in an Irish museum if I can. If not, you will 100% be 1st on my list.