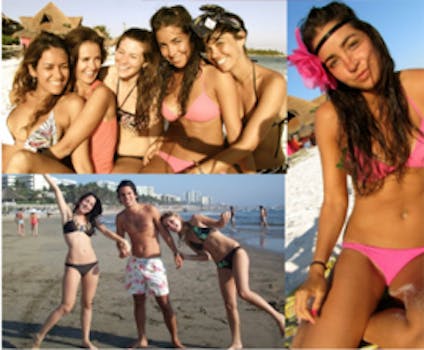 A new Facebook app that lets you download pictures of your friends in bikinis is taking “just because you can doesn’t mean you should” to whole new levels.

TechCrunch reported Sunday that the app, Badabing, made them “feel really dirty.”  Billed as “the only social image recognition app,” Badabing allows its users to have skin-revealing images of their Facebook friends delivered straight to their phone.

Just type in the name of the person you’d like to stalk and ogle, and Badabing’s skin-finding algorithm does the rest. You can then “temporarily download” images for perusal on your phone.

The app debuted a month ago, mostly to complaints from users wondering why the app wouldn’t find them poolside pictures of the women whose names they input. (TechCrunch reported the functionality “actually kind of works.”)  Badabing’s website says a web version of the app is also under development.

“We should add an option for chicks too!” says one of Badabing’s testimonials.

The app is targeted towards men—even its logo makes that clear:

It’s also raised concerns that it may attract another audience: pedophiles.

Users must be at least 17 years old to download the app, but it doesn’t appear to have any age limit on which Facebook member pages you can search. Its own search results display pictures of teenage girls and naked babies. 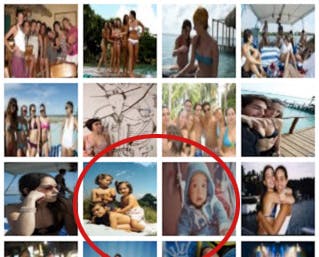 “I just saw the baby again,” commented Badabing’s creator, Erick Barto, when a TechCrunch reader pointed out the warped results. “I agree it’s pretty hilarious… completely out of place :/”

The picture, however, remains up on the app’s iTunes page.

Barto didn’t respond to the Daily Dot’s request for clarification on how the app works or whether Badabing stores any photos on its own servers. The app does allow users to bookmark photos for later viewing, though, and also includes a feature allowing you to search for “friends who’ve been Badabinged before.”

Badabing’s Terms of Service make no mention of whether making a photo private on Facebook after a Badabing user has already bookmarked it will prevent Badabing from showing that photo again.

Still, CNET praised the app’s honesty, and snarked, “All the bikini pictures on Facebook were presumably uploaded by people who’d like others to see their bikini pictures. …[H]ere is an app offering: ‘Find your friends’ sexy pics instantly.’”

But ultimately, CNET, like many of the commenters on TechCrunch, just wondered how long it would be before Apple bans Badabing from the App Store.