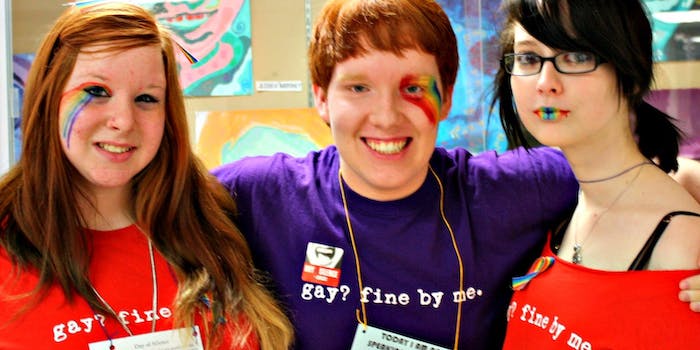 From his Twitter account (@Linn_Mar_Love), 16-year-old Matt Shankles stands up to bullies and sends out positive inspiration.

Instead of court orders and principal involvement, the 16-year-old student from Iowa has used Twitter to fight back and inspire others to do the same.

“Don’t be a bully. You just make yourself look bad,” Shankles tweeted under the account @Linn_Mar_Love. “Keep your chin up. You’re too important to be ashamed.”

Shankles created the anonymous Twitter account in response to another Twitter profile run by a fellow Linn-Mar High School student who used it to bully people, Patch reported. Shankles revealed his identity sometime last week, after “he was approached by many students that were bullied,” Patch added.

“Within the past three days I have felt very empowered,” Shankles said. “I have the power to make so much more.”

Bullying has become a national, hot-button issue recently, due in part to Bully, a documentary film that follows students from Mississippi, Texas, Georgia, Oklahoma, and Iowa who were bullied on an almost daily basis during the 2009-2010 school year.

Online bullying, in particular, happens on almost every social media and public forum out there. In March, for example, one 17-year-old Reddit user was was issued a juvenile citation for harassment after he told a female redditor to kill herself.

Shankles has been told similar things and even contemplated taking his own life when he was in the eighth grade.

Thankfully, Shankles did not act on his emotions and instead turned his situation into a learning experience. And no one is more proud than his mother Tracy Bradley.

“If I have done only one thing right in this life, it’s raising this kid,” Bradley said. “I couldn’t be more proud of the path he has taken. It is not an easy one, and it takes more courage than I have, but he handles it with grace.”