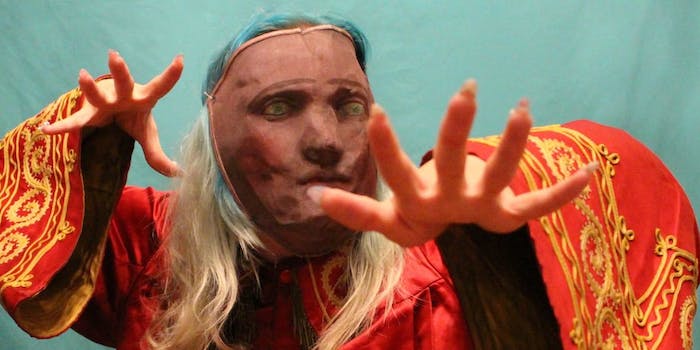 We talked to @A_single_bear about squirrels, haikus, and forest life

He had lots of questions for us, too.

With its diverse array of creatures and its plethora of sights and sounds, Twitter is not unlike a forest. It’s fitting, then, that one of the most popular anthropomorphic accounts on the site belongs to the king of the forest, the bear. Or rather, @A_single_bear. Little is known about the bear. He has a website where he posts choose-your-own-adventure stories, like this one in which you, the bear, must confront the discovery of a baby bird. His tweets, however, are the main attraction. In between missives about his routine and haikus about his woodland surroundings, he constantly reminds us of his identity: He is a bear.

Having four legs does not make you a bear. Tables have four legs. Tables are not bears. I am a bear.

Things I smell like:
-Dirt
-Trees
-Cave
-Sometimes mud
-Various berries
-Forest exploration
-Squirrel deceit
-A fish I ate about a week ago

Water from the sky:
something to get your paws wet
and you can drink it.#Bearku#haiku

The bear’s exploration of bearness and the challenges thereof has captivated us. We crave his next tweet the way he craves his next meal. And just as the bear once stumbled across a human feast…

I ate a cake I found.

…so, too, did we luck out and score an interview with the ursine VIP.

First, tell me about your early years. What is life like for a bear cub?

I cannot remember much about my early years outside of vague sounds and images. I remember a lot of squealing and moments of fuzzy warmth against my own fuzzy warmth. I also remember everything warm and good and nice ending very abruptly. If I had to guess what bear cub life is really like, I would assume it is very pleasant for a short time and then abruptly very sad.

“The squirrel then told me about Twitter, a system of expressing thoughts by utilizing a number of shouting blue birds.”

I originally expressed my inner thoughts by arranging acorn tops into words on the forest floor. I found this method satisfying until a rain storm washed them away. Rob (the squirrel) then told me about Twitter, a system of expressing thoughts by utilizing a number of shouting blue birds. Where he heard about it is a mystery, but I appreciate his guidance. In regard to my paws, they are quite articulate (claws help)… and fuzzy. And they smell good.

I do not think any one of my claws is better than the others. I enjoy them equally. They're all great at tummy scratching. I am a bear.

You write many haikus. How did you discover poetry?

Maybe the same way
you found this tiny poem
that I made for you.

Do you have many friends? I have seen you talk about Rob the squirrel.

I do not think Rob (the squirrel) is really a friend. Unless friends are supposed to plan and execute various schemes meant to shame and hurt you, physically and emotionally.

A list of animals who definitely have dangerous secrets and schemes that I am trying to thwart and are cleverer than anticipated:
-Squirrels

I asked Rob (the squirrel) what he was thankful for and he said, "You." As I smiled, he said, "She has such lovely wool." I was so confused.

One time I met a raccoon who did not hiss at me very much. Maybe he or she was my friend?

What are your least favorite animals to deal with in the forest?

I am not a fan of stepping on smaller forest creatures…

…Except for snakes. We do not get along. I am a bear.

Do you have any funny stories about salmon?

No, I do not. Salmon are noble, serious creatures who pride themselves on their important place in the harsh and cruel fair cycle of nature. Also, there are few of them in the streams I frequent.

From a bear’s perspective, how are humans treating your forest?

Plenty of campers and hikers leave empty food wrappers and energy drink cans behind. I am not sure how this impacts the forest, but I appreciate the leftovers.

Bad news: There is an unsettling dissonance between man and nature…

What would you say is the biggest misconception about bears?

The biggest misconception about bears is that one bear represents all bears. I have not known many other bears in my life, so I have no idea what we would have in common. I am a bear, not all bears. If I were all bears, however, I would say we are probably not as aggressive as we are perceived. Bears are more curious than angry.

Do I do what all bears do? I do not know any other bears, so do I do what comes naturally as a bear or as a particular bear? I am a bear.

Also, not all of us hibernate. It has been far too hot lately for hibernating.

What part of the world beyond your forest are you most curious about?

The moon. What is it doing up there? Why does it change its appearance from time to time? Can I taste it? Does it taste like or is it as soft as marshmallows?

It would be nice to meet the moon face-to-face. I bet it has many interesting anecdotes. I am a bear.

I am thankful for the moon and the sun not attacking and eating each other upon being forced to share the sky at the same time. I am a bear.

How many trees would I need to stack to reach the moon? I am asking for a project I am beginning to plan. I have access to many trees.

If a tree falls in the woods and no one is around to hear it, does it make a sound?

I would think the tree certainly heard its own crashing demise. Poor trees. They give so much, ask for so little, and fall so often.

I will check with some birds to confirm, however.

After answering my questions, the bear posed some of his own. When I originally contacted him, I mentioned that his tweets were “very popular outside of the forest,” to which he responded, “I did not know there were things outside of the forest. That is fascinating and makes me want to interview you about these non-forest things.” I was more than happy to oblige.

Here is our reverse Q&A, with the bear’s questions and my answers on behalf of humankind.

Bear: How does the sun work? I still have not figured it out.

Daily Dot: The sun is a mystery to humans, as well. We think it has something to do with a heat demon’s spell, but we are still working on it.

Where do marshmallows come from?

Marshmallows are produced by a special machine, only found in seven factories around the world, that can harness joy from the air itself and squeeze it into a treat.

Are there any marshmallow trees?

How many teeth do you have?

Most adults have 32 teeth, but some adults who are desperate for cash have fewer.

“If you could trade your thumbs for claws or fur or maybe sharper teeth, would you?”

Do you have enough teeth to eat all of those marshmallows?

I personally have more than enough teeth to consume marshmallows, cookies, brownies, and sometimes all three at the same time.

How do humans battle the futility of everyday existence without curling up in a corner and chewing on their paws until the numbness goes away?

Do you think paws are better than hands?

I cannot definitively answer this question, not having any experience with paws. But with my hands, I can extend the middle of my five fingers in a gesture of defiance. Can your paws do that?

If you could trade your thumbs for claws or fur or maybe sharper teeth, would you?

Claws would make it difficult to safely scratch my itches. Fur would be useful in the winter but then I’d have to groom myself. Sharper teeth signal to most humans that you are a vampire, or at the very least, a human-monster hybrid in service to a vampire. I’m going to stick with my thumbs.

Snakes are the worst, bear; you are correct.

Are there enough marshmallows for all humans?

For now, yes, but there will come a day when we run out of marshmallows. All good things must come to an end. I just hope I am not around to see the chaos.

At first, I wondered how I would end this story. Then I chanced upon a tweet from the bear that neatly encapsulates his peculiar appeal: optimism, mystery, and unwavering aplomb.