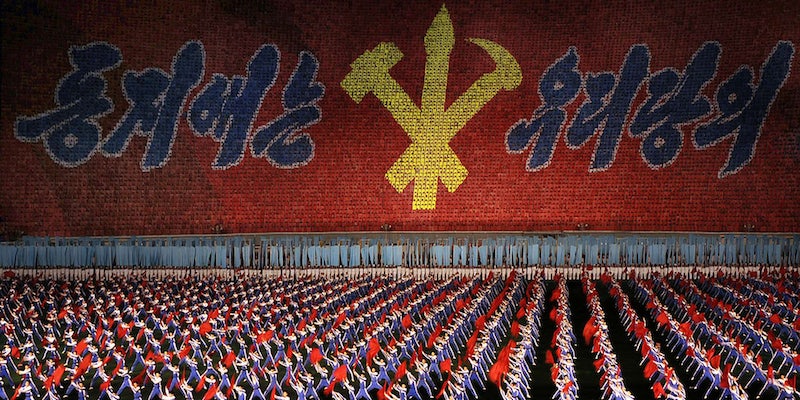 Hint: It's not just because he's a dictator.

It’s hard to tell whether the terrorists or Sony have won here: The studio has canceled The Interview in the midst of terrorist threats, thus turning a movie that likely would have been mediocre at best into a national martyr. You can’t buy that kind of publicity, and Sony is milking it for all it’s worth, as the national conversation becomes about the suppression of free speech. The Alamo Drafthouse really brought it home with their pledge to run Team America on the planned release date of The Interview, though Paramount pulled the plug on that particular plan. What fewer people seem to be talking about, though, is that while the terrorists might not be right tactics-wise, they’re right on a critical level: The Interview is pretty racist.

As pitched, the film revolved around two “journalists” recruited by the CIA to assassinate Kim Jong-un, the currently very much alive leader of North Korea. In what would have undoubtedly been a slapstick, rolling-in-the-aisles comedy, the two eventually succeed with a fiery on-screen death for the Korean dictator. We all like to see a notorious foreign leader get his due, but The Interview is somewhat unique when it comes to films taking on foreign powers. And it’s hard to believe that the film could have been made about any country other than North Korea.

The movie does something unprecedented with the use of live-action characters to act out the death of a sitting world leader (Team America’s puppetry made for a very different presentation, although comparing Kim Jong-il to an alien cockroach wasn’t exactly a humanizing move). The fact that the producers picked North Korea isn’t a coincidence—imagine the same kind of film being made about Iran, Idi Amin, Bashar al-Hassad, Manuel Noriega, or even Hitler, who was mocked in propaganda films while he was alive, but never put to death. What’s the difference between those men and Jong-un and his father, Kim Jong-il, the subject of Team America? Both men are Asian, and that plays a large role in why they’re considered fair game by studios like Sony and Paramount.

The demasculinization of Asian men is a recurrent theme in American society, from the very early roots of anti-Asian racism along the West Coast of the United States in the mid-1800s, when Chinese laborers began arriving in large numbers in search of Gold Rush fortunes. Instead, they found themselves working in a limited number of positions as camp cooks and launderers, denied citizenship and equal rights, forced to live in the United States without their families and squeezed into cramped conditions in squalid “Chinatowns.”

They were also the subject of broad racist campaigns, including the infamous “yellow peril,” which suggested the Chinese population had evil designs on whites, like the prospect of white slavery (forced prostitution) for innocent white women. Under the guise of protecting vulnerable white communities, Chinese immigrants were persecuted, hung, beaten, and refused the right to own property or even marry. Along the way, a mythology about Chinese and other Asian men arose, starting with the belief that “they” all looked alike, a sea of yellow faces, carrying the risk of a perilous revolt.

Asian men were also cast as submissive, beaten down, and feminized—in California, where this myth originated, the image of the tame Chinese man contrasted sharply with the icon of the well-built, masculine, white miner. California was a nation filled with rough, rugged, manly white men, in sharp contrast to the soft, meek Asian men who did the cooking and the laundry—women’s tasks—because they weren’t allowed other jobs.

The attitude that Asian men are feminine and lesser than their white counterparts persists to this day, along with slurs, harassment, and other unpleasantries for the Asian community. Myths about the reduced size of their penises endure and they’re considered undesirable dating prospects; one need only look to the racist responses to Lorde’s rumoured boyfriend, James Lowe, to see evidence of that. While Asian women are exoticized and commodified, Asian men are perpetually regarded as less-than. People still assume that Asian men are meek and submissive and success, for Asian men, often means assimilation into white culture.

Kim Jong-un in The Interview is funny to American audiences in the same way that a puffed up, angry rooster is funny to the casual observer; he’s reduced to a small, unimportant man by virtue of his race, with audiences laughing at the idea that he’d be one of the most terrifying living political figures. He’s painted with a Napoleon complex—though for the record, Napoleon was average in height—and mocked by American audiences not because he’s a dictator and satire is a form of political commentary, but because he’s an Asian dictator. Killing someone in an almost cartoonishly violent fashion is the ultimate denial of masculinity, and that’s exactly what happens at the end of The Interview as our heroic leads diminish Jong-un to a pile of ashes.

“Kim Jong-un’s heft and his babyface play directly into pre-existing stereotypes about Asian men and their (lack of) masculinity, making him an even easier target for ridicule,” write Claire Groden and Elaine Teng at the New Republic. “Many think of him as a giant baby rather than the leader of one of the world’s most brutal police states.” Seanna Pan at Mother Jones made a similar point about how we view Asian masculinity, this time in the case of PSY: “Are we laughing with PSY as he takes his rightful place in pop cultural history? Or at him…?”

The very idea of making a film about the death, let alone a violent one, of a world leader is one that most producers, directors, and studios would shrink from. If the subject were taken on, it would likely be in the form of a drama that handled it like the hot potato that it is, or it might happen off-screen. In The West Wing, for example, President Nimbala plays a minor role in the season two episode “In This White House,” where he’s summarily executed in an airport parking lot—and he’s the fictional leader of a fictional nation, with a death very much played for dramatic effect, not laughs.

The Interview’s choice of Kim Jong-un was no accident. The producers were well aware that the movie would have been inflammatory both in the United States and internationally had any other world leader been selected as the target of a “hilarious” assassination. What Sony didn’t expect was that North Korea might fight back.

Nothing about Kim Jong-un’s iron-fisted rule over North Korea is funny. The nation has a horrific rate of child poverty and malnutrition, while an approximate 100,000 citizens are imprisoned in political internment camps, and the country lies behind an iron curtain that makes it virtually impenetrable. Punishments are swift and harsh for those who speak up against the regime, and North Korea is considered one of the top human rights violators in the world.

Clive Crook, the man behind the Economist’s famous “Greetings, earthlings” cover, expressed stark regrets about it when he reflected on how there’s little to mock about the Kims: “You don’t make jokes about concentration camps and you don’t make jokes about torture, I thought as I read the report [on human rights violations in North Korea]. It was a memorable cover, but there’s nothing funny about North Korea.” As he noted, North Korea is a land of untold horrors for its residents, no matter how distant it feels from the life of the West.

That makes North Korea very much fair game for political commentary, including satire that makes biting observations about dictatorships—as Charlie Chaplin did in The Great Dictator. The 1940 film didn’t just poke fun at Hitler and Mussolini; it also took on the very concept of what it meant to be a dictator, and Chaplin made a risky political move with the film by releasing it when he did. The Great Dictator was a bold, dramatic political statement. This Way for the Gas, Ladies and Gentlemen was a sardonic, bleak, melancholy commentary on life in the concentration camps and another sharp political statement.

The Interview, though, isn’t really about North Korea. It’s about how we view Asian culture, and while The Interview attempts to show how ridiculous dictatorship is, it doesn’t make us look good, either.