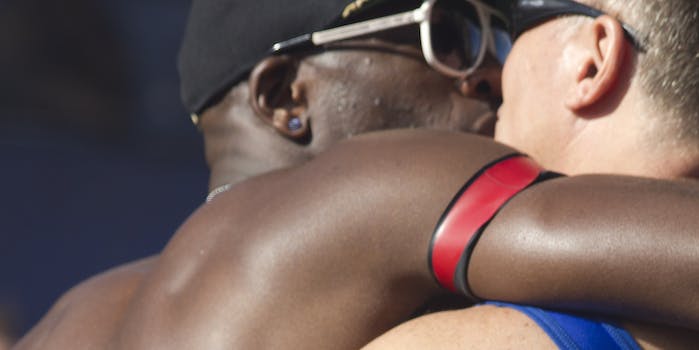 The producer insisted I was in the minority and that my video wouldn’t go viral if I insisted on having a white top.

“But what about African Americans?” I asked. “Are you telling me there isn’t a black guy out there who wants to see white tops?”

Like all stereotypes, there is a degree of truth in that characterization of gay white men. My friend Mike, who’s African-American, recounts many a disappointed look in the faces of white guys who hit on him. Mike looks a lot like the black guy many whites fantasize about having sex with: He’s good-looking, tall, and big. But once they hear him speak, a lot of white guys lose interest, because Mike doesn’t exactly talk like the stereotype of a “tough guy from the streets.” Seeing their thug fantasies evaporate, these white guys lose interest and walk away.

First, the nature of topping. It’s often about power and domination. If you were going to build the ideal top, you’d probably say he has to be bigger than you are, in terms of height, weight, and package size. And you might say that since topping is about exerting control, he should also be more aggressive and take-charge than you are.

And to completely upend the stereotype that blacks have bigger penises, I invite you to look at the latest penis-size study in the Journal of Sexual Medicine:

The difference in length and circumference between the races is statistically insignificant. The study found that characteristics such as race or sexual orientation weren’t good predictors of a man’s penis size. The study is relatively consistent with the results of prior surveys.

The Power of Stereotypes