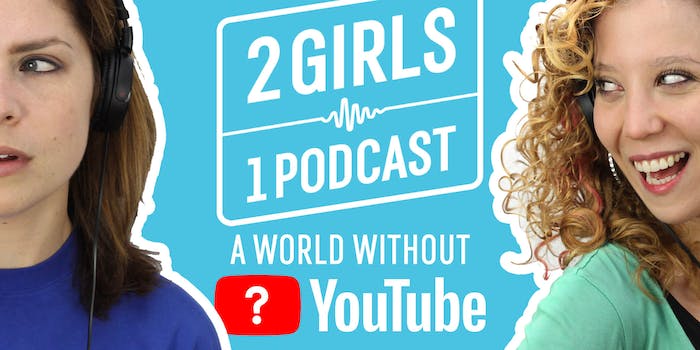 Is a world without Keyboard Cat even worth living in?

An entire generation has grown up in a world where uploading hours of 4K video to the internet is not only common but expected. But, what if the legal and technological barriers that killed Napster and other file-sharing sites had also crushed YouTube? In 2006, despite its growing popularity, YouTube could easily have been wiped off the map by copyright battles and the skyrocketing cost of hosting humanity’s video.

So, what would the internet, its culture, and the world look like today if YouTube had failed? Adi Robertson, a senior reporter at the Verge, has imagined just that in her alternate history of the web. While mostly an entertaining thought experiment, Robertson’s theories are rooted in “Web 1.5’s” corporate landscape, and what was technologically possible at a time when putting video onto the internet was no easy task.

This week on 2 GIRLS 1 PODCAST, Alli and Jen talk to Robertson about the inspiration for her piece, why education and politics would be different, the miracle that YouTube exists at all, and WTF a “mesh net” is.