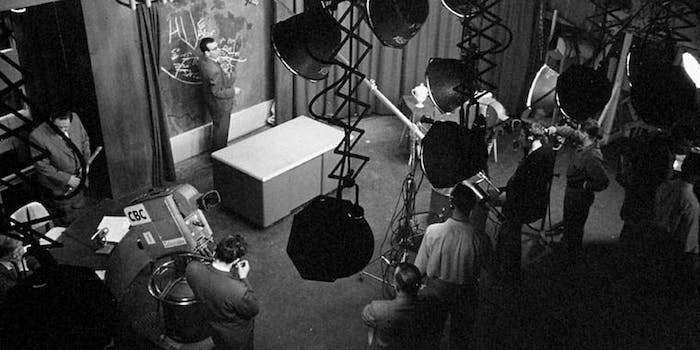 Why TV still can’t get the Internet right

Somehow bolstered by the utter failure of the late ABC sitcom Selfie, NBC announced this week they’ll be producing a half-hour sitcom dubbed #Winning. The show is not, however, about the Charlie Sheen fiasco which made the hashtag famous, but a true life incident between the show’s writers when a “suddenly famous pal broke up with their entire friend group via a form letter, leaving them more determined than ever to ‘win’ at life.”

While not seemingly as focused on social media as Selfie (a Pygmalion retelling about a social media diva who lacks social skills IRL), the NBC show marks yet another attempt by network television to cash in on the digital milieu that surrounds us all. These are thinly disguised efforts by a dying technology to play along with the kids that now get most of their entertainment online. Such trend fodder as these and the upcoming CSI: Cyber are lazy attempts to profit from the zeitgeist, basking themselves in a reality already too cliche to be intriguing.

This wouldn’t be the first wave of such “netsploitation”: The ‘90s saw films like You’ve Got Mail and The Net play on both our hopes (Meg Ryan and Tom Hanks find love online) and our fears (Sandra Bullock is a net-savvy techie tracked by online terrorists). While the Internet was only beginning to reach mass ubiquity, its novelty acted as both a dull plot device and a source of fear mongering.

What’s being released today, however, is far different. Hollywood isn’t simply stealing from the latest trend; it’s falsely harnessing what it thinks makes social media interesting, draping cliche references and the day-to-day realities of social media across dry plots and empty characters, hoping the dressing is enough to make the show cool. Perhaps the biggest expression of the fatigue this generates amongst audiences is the lack of technology in television’s top shows.

Take, for example, Duck Dynasty, which is aggressively absent of modern technology. Or, for that matter, Breaking Bad. Although the late, great AMC drama had many opportunities to empower Walter White with the online world, it does so only in the form of a money-laundering website (which looks like it could’ve been built 15 years ago). And despite its constant presence online, Game of Thrones exists in a world completely absent of even electricity. It’s an odd fact of our culture that, even as our actual selves merge further and further with our online space, we seem to crave watching an existence without it.

A large reason for that might be the innate connection between online spaces and marketing. The inclusion of the hashtag in the title #Winning is more than a bad joke: It’s a transparent attempt to bend the show around its own publicity campaign, like Selfie before it. When The Voice tells you what hashtag they’ll be using each week, it’s their marketing being slipped into the program. By making the title of the show itself a hashtag, these networks are slipping a TV show into the marketing.

Not to say that it’s been a very successful system: Selfie was cancelled after its sixth week and never netted better ratings than its premiere. Other get-rich-quick schemes utilizing short-lived social media fads have met similar fates. S#*! My Dad Says, based on the formerly popular Twitter account, was canceled mid-season and the Grumpy Cat Christmas special is being panned before it even airs (for crimes as varied as overexposure and animal abuse).

These failures reveal a broader rift between audiences and content creators. People have knee-jerk reactions to being the target of a marketing campaign, and nothing will engage that reflex more than hinging your show on buzzword-y dialogue and flavor-of-the-month plot points. It’s a limp, desperate attempt by a dying technology to stay relevant. But in the same way a used car salesman who calls himself Honest Larry will always appear less honest for doing so, a TV show built around a trend (or even trending) will always appear less trendy for doing so.

It reduces television—which is supposedly in its Golden Age—to the same level of genius found at a boardwalk t-shirt shop. Instead of creating interesting, original content, these shows and movies are merely recreating the culture derived from social media, regurgitating old memes to an audience already tired of whatever they’re selling.

Part of this is due to the relative speed of the Internet over television. In the constant fracas of social media, what might seem to be a huge, surging trend could fall to the wayside within the hour. By the time such a trend can be developed into a pilot, it’s likely been shoved in the face of the populace to the point of breeding contempt. To paraphrase Winston Churchill, the Internet can spread a joke halfway around the world before television can get its pants on.

But the more fundamental failure is the complete misunderstanding of what can make the Internet so compelling. It’s a constant, interactive experience (whereas TV is completely passive). The most important data for traditional TV should be the Variety-funded study that found YouTube stars are way more popular with teens than any mainstream celebrity. Smosh and PewDiePie offer a level of interaction TV will never match.

What television as an industry might need to get comfortable with—especially if the industry wants to hold those demographically-valuable teens—is actively feeding social media with interesting content instead of waiting for the Internet to hand over the culture it creates. At any given point, the top trending topic on Twitter is likely to be a TV show, be it a football game, an appearance by a boy band on morning news, or a Walking Dead episode. People are watching more TV than ever and sharing that love on Twitter, Facebook, Reddit, and just about anywhere else you can imagine.

By attempting to shoehorn social media into their programming, networks are misunderstanding their role in this process. Audiences are begging them to supply interesting content for them to go crazy about online. They actively want to cover your theme song on YouTube, create a GIF-based Tumblr about their favorite character, and analyze and re-analyze fan theories on Reddit. TV is what we’re talking about and the Internet is where we talk about it.

When you flip that dynamic—creating TV that bases its content on the Internet—you purge your audience of its most important members. The most savvy social media users (i.e. the ones that drive trends and have influence) are also the most likely to be hyper-aware of the scent of desperation on the part of a network simply because they use the services TV is exploiting the most. If TV wants to play with this Web-savvy generation, it needs to stop acting like an aging parent hanging out with its teenage daughter and just be itself.