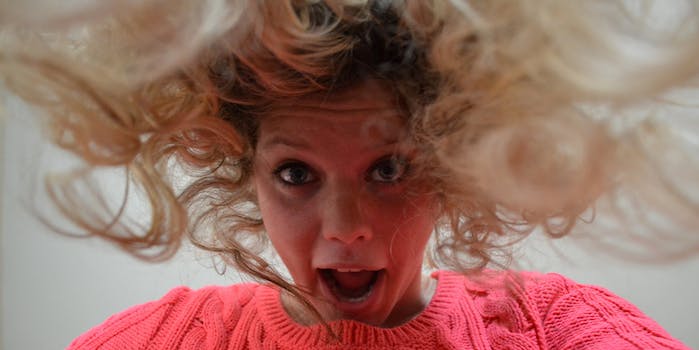 I found naked pictures of myself on the Internet

I never thought I'd see my private pictures on the Internet for everyone to see.

About a year ago, I found pictures of myself naked on the Internet.

I hadn’t put them there, I hadn’t consented to having them posted, and I definitely hadn’t been prepared for what I read in the comments: violent and cinematic descriptions of rape and abuse, juxtaposed against my open mouth and thigh-highs and undone bra. My face was clearly and fully visible. I wouldn’t have seen them at all if it weren’t for a friend tipping me off, the link embedded in a carefully neutral email that I appreciated later for its lack of assumption about what I was supposed to feel. “You look sexy! Do you know about this?”

I was 22 in the photos. I was posed and smiling for the camera. I’d certainly consented to having them taken by a friend who did my hair and makeup and perched on a wooden stool to get the best angles. The stool broke at one point and we laughed about it.

When the pictures were taken, I’d already let go of the fantasy of posting them anywhere: The anonymity of my AOL chatroom childhood was long gone, replaced by Google image search and linked accounts. I shared some of the photos with a few people I trusted. I was old enough to comprehend consequences, but not old enough to accept my part in avoiding them. Apparently, I’m still not, because I refuse to accept that I was even remotely at fault for what happened.

About 20 NSFW photos of me taken during that shoot were stolen from my computer by a guy I knew, a guy I considered a friend, a guy I felt safe around. I found out later that he’d put them in a folder on his desktop, alongside numerous other folders labeled with the names of numerous other women that he knew. I still don’t know what was in those folders. Probably some photos pulled from Facebook, probably sometimes more. I called a few of the women and left it up to them what steps to take. You can only do so much.

The words were words I might’ve melted to have texted to me or mumbled into my hair by a boy I’d chosen with a liberal arts degree and nice hands—words like “slut” and “defile” and “slap” and “hard” and “tight.” Context is everything. Here those words weren’t mine, weren’t asked for or enjoyed. They weren’t for me.

After I saw the thread online I felt panicked, then numb, then miserable, then afraid. I didn’t know what I was supposed to do. The immediate and urgent need seemed to be figuring out who did it, and collecting a confession. I was right on the first guess. He wrote me a long and rambling non-apology as only a straight white guy can do, full of justification and short on insight.

I called my friends. I tried being somber, I tried joking, I tried asking for advice. I told my mom. I kept waiting to hear the words I thought I might deserve: “You flirted with him, didn’t you? Maybe he thought you wanted him to do it. Doesn’t your computer have a password?” And, most of all, those awful, useless words we hear so often: “Why would you take naked pictures of yourself, anyway?” To the credit of everyone I love, I didn’t hear those questions. I heard sympathy and support and a clear indication that I was the victim of a crime.

I went to a lawyer who quoted me a retainer that was out of my price range to instigate a civil suit, which seemed to be a legal kind of blackmail in which we would try to collect money from him (or really, since he didn’t have any, his parents). It didn’t feel right. I didn’t want money, I wanted for it not to have happened, and nobody could give me that.

I toyed with the idea of reporting it to the police, but at the time the pictures had been stolen I’d been living in a different state. I called the police precinct there but they seemed confused and skeptical and wanted me to come in. I’d read enough horror stories about the way sexual assault victims are treated to decide that I didn’t want to go to the police. Also, I’d have to give them the screenshots.

Sometimes when I was just about to fall asleep or wake up, I thought about forgiving him. I thought about what he wanted when he used my pictures that way, how much he must have needed the attention and the admiration of the other messed-up awful assholes who lurk on those forums thinking we deserve what we get. I thought about how lonely he must have been and how bad he might’ve felt about himself afterward, but then I always came back to the comments and I just couldn’t find forgiveness.

I memorized the comments and replayed them while showering, while getting dressed, while grocery shopping, while having lunch. I thought that for the rest of my life I would remember this as the “before” time. The last time I bought limes before I filed the suit. The last time I ate carrot cake before I became The Girl Who Was Naked On The Internet.

A week passed, and then a month passed, and then another, and sometimes I felt angry and sometimes I cried but mostly I felt stuck. I started to imagine that maybe if I waited, it would just go away. That I would just become another one of tens of millions of girls who are naked on the Internet. Some professionally, some for fun, some for art, some against their will, some without their knowledge. In the end I didn’t do anything, and eventually the link became inactive. What was my page is now a blank sea of white.

Of course, the pictures aren’t gone. They’re still out there, somewhere, distributed innumerably. They could come back at any time. This will never not have happened.

It’s true that in writing this I might be making myself even more vulnerable than he made me, that I might be increasing the likelihood of being found someday with my 22-year-old legs apart. It’s possible that the comments on this piece will hurt me further. But I can’t seem to find it in me to regret having the pictures taken.

No, I don’t want or deserve to have identifying information linked to them, because I value my personal safety. Yes, I’m publishing this piece anonymously, more to protect my family, friends, and employers, than for any other reason. But I refuse to be ashamed of the pictures themselves, of having taken them, or for any other of my ambivalent and complex desires.

Ten years from now, I hope that we’ll talk about that point of view as dismissively as the way we’ve begun to talk about abstinence-only sex education and victim-blaming as applied to rape. We’ll recognize that online, as in the physical world, the responsibility of safety must lie on the person doing the threatening. We’ll stop scolding 16- and 17-year-old girls for sending pictures to their boyfriends, who disseminate them or use them for blackmail years later. We’ll stop using euphemisms like “scandal” and “leak” to describe a violation, a crime with a defined victim, an act of violence. We’ll place the blame where it belongs.

Maybe we’ll even recognize that, contrary to the fabled belief, our souls aren’t lost or damned when we’re captured on film. That for a woman to be seen naked, preserved in time, should never ruin her life or end her career or hurt her family. That if she’s of age and wanted to be seen that way by those she chose, to shape her image, to show off the parts of her body she adores and values, we should do nothing but celebrate it. It’s in the comments section where you’ll find the shameful part.