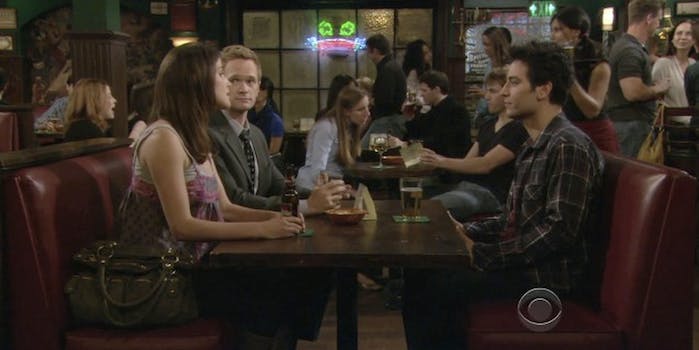 Can we say that part of this disaster of a finale to a well-loved show is the fault of the culture we live in?

This past Monday night, fans of the romcom-sitcom How I Met Your Mother were finally treated to the finale—in which protagonist Ted Mosby finally met “The Mother,” whose appearance has been foreshadowed for literally the entire season. In keeping with such a momentous occasion in this life of a popular show, the outcry was deafening.

While certain grievances (such as the death of the mother in question) have been foreshadowed for years, the disappointments piled up during the show’s final hour. From Barney’s and Robin’s divorce and general years-long tensions within the group to the fact that the show has been moving away from the Ted/Robin relationship, many fans suggest that the nature of the show was misleading; it should have been titled “How I Met Your Step-Mother,” “How I Ruined Nine Years of Television in Forty Minutes” or “How I Used to Bang Your Aunt Robin Before I Met Your Mother. Your Mother’s Dead Now. Can I Bang Your Aunt Robin Again?”

The finale was, indeed, sloppy—condensing 20 years of plot into 40 minutes, after extending one weekend into a full season—and consisting of an inconsistent mix of brave refusals to cow to rom-com tropes, and cheap, unearned sentimentality.

However, can we say that part of this disaster of a finale to a well-loved show is the fault of the culture we live in?

The rampant fan-theorizing that plagues every television show has been speculating about the ending to this show practically since the show’s beginning, and the now-proven, in particular, “Dead Mother Theory” has been gaining traction for years. Such is an inevitable outcome of the boosted communication of the Internet age; small details (such as the “Where’s my wife?” in season three’s “How I Met Everyone Else”) have always drawn the attention of a small few.

The difference now is that Internet culture enables these few to widely publicize their notice of these details, and the larger implications they may have for the future of the show. What once might have been the subtlest of foreshadowing is now broadcast via bullhorn.

This inevitably leads writers and producers to try all the more to keep twists underwraps and to mislead the audience. After all, no writer wants to be predictable, even those who write sitcom-romcom hybrids.

So, we can see in the case of the HIMYM finale a transparent attempt to resist the tropes which audiences now recognize before they are even fully formed: The friend-turned-girlfriend-turned-ex did not continue to hang around and produce tension for the next 10 years, the on-again-off-again-finally-married couple is off-again for good and the stable ensemble of friends were not together forever.

Much of the disappointing facets of the finale were a result of the writers refusing to give in to tropes (which audiences can now see coming around the corner), insteadshowing a somewhat true-to-life progression of events. Divorces do happen, friends drift apart, and when you sleep with 31 women in a single month, odds are good one of them will get pregnant. In fact, the only predictable tropes which this final episode fell back on are those the audience has been led away from for nearly a decade (e.g. the Ted-Robin romance). The letdown of this finale comes from the desire to mislead the audience and resist predictability.

As fan reactions have shown, such misdirection is an unsuccessful approach. While there is admirable courage on the part of the writers in bucking the fake happily-ever-after sitcom tropes that have become second nature to audiences, it’s just a bad idea in this case. You can’t throw in a twist if the audience doesn’t want to be tricked.

HIMYM‘s writers wanted to have it both ways—a storyline that would allow Ted to romance his wife and Robin, too—and failed in each endeavor. Ted might have finally gotten The Mother and The One That Got Away, but judging by the backlash, his ending was anything but happy.

Photo via DBarefoot/Flickr (CC BY 2.0)