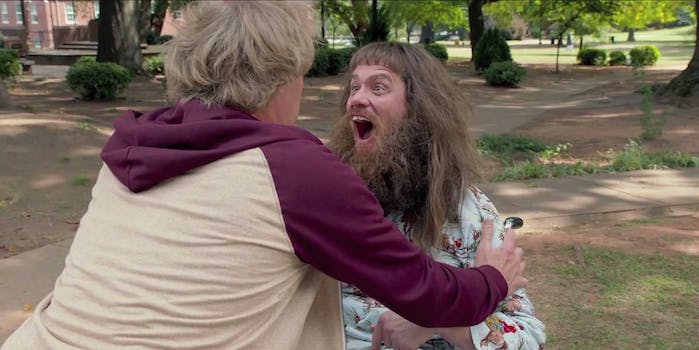 Can ‘Dumb and Dumber To’ survive the Internet?

The jokes haven’t become smarter, but the audiences have.

On Tuesday, the Dumb and Dumber To trailer hit the Internet, met with excitement from a great many fans of the original film (which, by some bizarre rift in the space-time continuum, is already coming up on its 20th anniversary). And judging by the trailer, it looks as though Jim Carrey’s Lloyd and Jeff Daniels’ Harry have scarcely missed a beat in all that elapsed time.

The first film has stayed with audiences in large part to its understanding of how to successfully execute what might best be called the smart-stupid comedy. When done well, the smart-stupid comedy revels in sixth-grade laughter—gags of preposterous wordplay and defecation and complete dolts whose very presences are ripe for comedy. Dumb and Dumber is one of the defining examples of this school of comedy precisely because of how much mileage it’s able to get out of the one-note premise of complete morons on a road trip with criminal implications. It could’ve been a far worse movie than it ended up being.

But then, such movies have by and large fallen out of fashion. The Farrelly Brothers’ name isn’t worth what it once was, thanks to a post-millennial stretch of movies typically ranging from bad to Movie 43. Their style of traditionally madcap, heavily physical slapstick isn’t really in vogue, a sentiment boldfaced by their ill-fated attempt to revive the Three Stooges franchise in 2012. And what’s replaced it, by and large, has been the evolution of the juvenile movie from pure lark to subtext-heavy filmmaking, thanks in large part to the Judd Apatow school of adding self-awareness to the smart-stupid movie, therein leaning ever more heavily on the former part of the equation as they move farther away from the latter.

And in an era where the Internet dictates everything from the ways in which we talk about movies to the ways we watch them (and, increasingly, how they get made), it’s going to be harder than ever for that style to return. Part of this can be explained by the public’s changing sensibilities, but also by the ways in which we take in and approach comedy. With memes having moved beyond the digital and into everything from ad campaigns to, indeed, their own feature films, the quick-hitting gag has become king. It’s why parody movies, most of the time the lesser cousin of the smart-stupid movie, struggle to stay afloat as of late. A serious piece of work can be approached from every angle within mere hours from Twitter to Tumblr and so on, and the half-life of a running meme gets shorter with every day. By the time a studio could even begin to bankroll a spoof, the world has moved on.

Intelligent comedians have manipulated this to their advantage. The Lonely Island became its own comic force independent of its Saturday Night Live roots because of Andy Samberg, Jorma Taccone, and Akiva Schaffer’s understanding of how audiences want jokes. Time is of the essence. A three-minute bit is far easier to take viral than a 90-minute film and runs far less risk of overstaying its welcome, as even most of the best modern comedies do. (Another byproduct of the Apatow takeover: a general disdain for the brevity of wit.) For proof of this, look no further than Lonely Island’s attempts at filmmaking, MacGruber or Hot Rod or even Land of the Lost. While all have their defenders, they were all box office flops to various degrees.

And the cycle keeps getting shorter. Consider the popularity of Jimmy Fallon’s viral-ready late night segments; indeed, it’s on Fallon’s show that the Dumb and Dumber To trailer debuted. Millions have taken to YouTube to watch Fallon recite the history of hip-hop or talk in hashtag parlance with celebrities, many millions more than the average weekly viewership of his show. The attention span for comedy has changed, and while people are far from averse to the movie comedy (Neighbors’ surprise success speaks to this, for one), they’re being more selective. And they want their comedy smart and knowing, with a nice side of pop cultural relevance. Nostalgia for generations past is typically a bonus.

This puts Dumb and Dumber To in a curious position. Dumb and Dumberer, the attempted 2003 prequel, was stupid more than it was smart-stupid, but most of the other films within that subcategory have failed unless they headed for one or the other exclusively. Wet Hot American Summer, the aforementioned Lonely Island productions, these are movies of a different time and sensibility. Most of them ask you to key into setups that can’t be delivered and rectified in a few short minutes. (Hot Rod, for one, is a movie that practically exists as preamble to a ridiculous final punchline that immediately concludes the film.)

And though the original Lloyd and Harry are back, they’re returning to a climate of film comedy that’s changed a lot since they last came around. The jokes haven’t become smarter, but the audiences have.

Photo via Dumb and Dumber To/YouTube