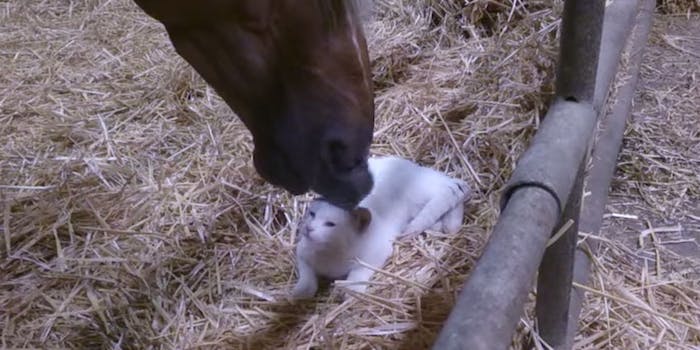 Watch a horse and a cat cuddle, and never be the same

Is this the friendship we've been waiting for!?

Cats have always been the animals of choice for Internet obsessives and the perpetually single. But it turns out that horses are also quite taken with them.

And when you think about it… the Internet is into horses. This is the friendship we’ve been waiting for.

YouTube user Vinz Barrachin’s video is a ode to the very mutual affection between a tiny white cat and a massive horse. The horse, which apparently doesn’t have allergies, caresses the cat’s head and back with its rubbery lips. In turn, the cat returns the love by rubbing up against the long face of its stabled buddy, as if it was nothing more than a foul-smelling table leg.

Who knows? Perhaps the horse is a reclusive gamer. It can’t be any worse than I am at Halo 3.

We’ll give you three wild guesses as to which animal walked away first when boredom struck.