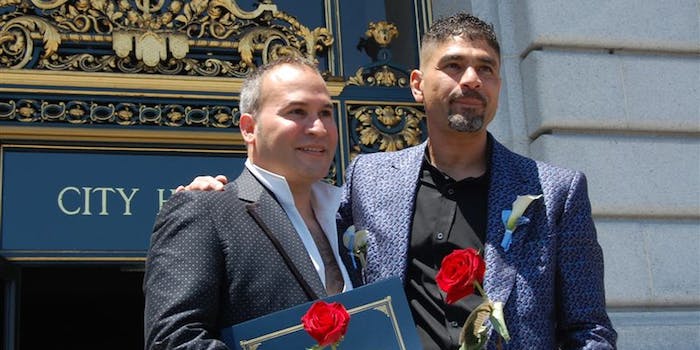 How the Internet made us gay

If you told me a decade ago that Alabama would legalize same-sex marriage, I wouldn't have believed you.

“How many of you believe gays and lesbians should be able to marry one another? Raise your hands.”

Our interrogator was not a Gallup census taker but a historical reenactor, dressed as a 19th century schoolmarm. In 2001, my 24 sixth grade classmates and I ventured thirty miles outside Chicago to witness a day in the life of the population at a turn of the century settlement. The day’s field trip culminated in a tenuously related public opinion poll comparing frontier women’s educational prospects and LGBT rights. As a closeted middle schooler, I stared intently at the worn beams of wood comprising the one room schoolhouse’s floor and desperately willed the exercise to end.

In the intervening fourteen years, the U.S. populace has undergone a drastic reorientation in its beliefs regarding the inherent human dignity of LGBT people and their attendant civil and political rights. Between 2012 and 2015, the number of states allowing same-sex marriage has quadrupled from nine to 37, plus the District of Columbia. If you’d told me a year ago that gay marriage would soon come to pass in Alabama, I’d have gently reminded you that this is a state whose citizens would sooner fly Confederate flags than rainbow ones.

But, most significantly, the Supreme Court has agreed to hear cases from Michigan, Ohio, Kentucky, and Tennessee, which will decide whether the Constitution requires that all couples, regardless of gender, be allowed to marry despite prohibitions in their particular states. Should the court rely on the same logic it’s used in its previous decisions, their ruling in June of 2015 could mandate recognition of every gay marriage in the U.S. regardless of state lines.

In 1996, only 27 percent of Americans thought that same-sex marriages should be considered legally valid. Less than 20 years later, that number hovers around 54 percent in the total population, jumping to 78 percent among men and women between the ages of eighteen and 29 (87 percent of whom use Facebook). Much has been made of these quantum leaps in such a short timespan, all of which begs the question of what factors account for this dizzyingly fast statistical inversion in public opinion. The answer may have to do with the unprecedented way that social media has reshaped the way we interact with one another.

Specifically, the current sea change has not merely the Internet, but the proliferation of social media networks in the early aughts, to thank for its ascendance. The Internet aids in the rapid dissemination of information, but cyberspace alone is a vast chasm of anonymity. Outlets such as Facebook, Twitter, and Instagram have accumulated billions of users, but they specialize in allowing us to feel intimately connected to one another. We share photos, “life events,” links to articles, and oftentimes our beliefs on these platforms, creating a digital dialogue that serves as an approximation of face to face communication. However, unlike our real lives, our social networks tend to be comprised of thousands of individuals from various stages of our lives, most of whose thoughts on the Big Game in their present hometown become the digital detritus of the modern era.

But this deluge of content from people we otherwise wouldn’t be keeping tabs on yields some unexpected benefits. The imperfect algorithms of one’s newsfeed are akin to the digital equivalent of panning for gold: Most of it’s muck, but you encounter the occasional gem.

To wit, I have a Facebook friend who used to occasionally drive me home from school after our respective soccer and track practices. Many years later, she now identifies as a queer person, forgoes gendered pronouns and makes hand-crafted wooden home goods in Oakland. I know these specifics not because either of us made an effort to stay in touch over the years but because I’ve gleaned the details from her evolving social media presence. Her posts and photos offer a glimpse into a community I don’t necessarily encounter in my day-to-day life, and I’d argue that my experience extends to the rest of her digital acquaintances, however removed from queer artisanal goods circles they may be.

Similarly, while you might not feel comfortable broaching the subject of gay marriage with your aunt at the Thanksgiving dinner table, the mediated space of social media allows for you to make your opinions known without instigating a more direct confrontation. In an age where your Tumblr-meme-generating niece and less-than-web-savvy great aunt must somehow inhabit the same digital ecosystem, cross-pollination will inevitably occur. Great aunt Gertie may not really get the fuss over Katy Perry‘s dancing Super Bowl sharks, but she probably understands the intrinsic (if blatantly manipulative) emotion behind such Upworthy click bait as “This 7th Grader Came Out To His Friends. What Happened Next Will Make You Weep!”

I don’t labor under the illusion that every political opinion shared on Facebook alters the entrenched belief systems of our online acquaintances or directly impacts Supreme Court decisions. And admittedly, as any YouTube comments section on an “It Gets Better” video testimonial will tell you, the Internet is rife with vitriol and trolls—vitritrolls, if you will. But, what we do on social media, including something as simple as changing one’s profile picture, can have a significant impact on normalizing support for a cause like marriage equality.

In March of 2013, the Human Rights Campaign urged Facebook users to change their profile pictures to the red equal sign in advance of Supreme Court proceedings for two legal cases regarding same-sex marriage. The initiative was a success: More than 2.7 million people (120 percent more than usual) changed their profile pictures during the following several days according to data released by Facebook. The change was especially rapid in liberal college towns like Ann Arbor and Austin, but even if you weren’t a young college kid filled with solidarity during a tipping point in American history, you’re probably friends with one on Facebook.

And when a lot of people get behind the same idea at the same time, it makes everyone else pause and ponder: 1) What’s all the hubbub about? and 2) Where do I stand? That moment of contemplation is critical. It might not change your mind one way or another, but the conversation is now in play. Making your beliefs demonstrably clear to everyone you know creates a powerful pattern of social proof implying that it’s acceptable and even fashionable to assert yourself in favor of your convictions and ultimately encourages a more accepting environment in our real, offline lives.

The Internet is ubiquitous, egalitarian, and a source of information and connection. In a previous era, a young gay kid growing up in a state less than friendly to LGBT people would have had far fewer mechanisms for finding and connecting with other people like himself. There’s a lower barrier to entry in opening up Tinder on your iPhone and furtively switching “interested in” to men than there is in mustering the courage to go solo at the nearest gay bar, or probe the dubious depths of Craigslist. Given the unsurprising correlation between states with the least acceptance of gays tending to have the highest numbers of men in the closet, a connected culture wherein one can dip a toe in the rainbow waters without leaving the couch is a significant gateway in the journey to living a more authentic, visible life.

As the Supreme Court prepares to make a decision that could bring equality from the Redwood forest all the way to the Gulf Stream waters, I am compelled to quote the uncommonly poetic words of justice Margaret Marshall’s majority opinion in the landmark case of Goodridge v. Department of Public Health that first allowed lesbians and gays to lawfully wed in the United States. In her ruling she writes:

Civil marriage is at once a deeply personal commitment to another human being and a highly public celebration of the ideals of mutuality, companionship, intimacy, fidelity, and family. Because it fulfills yearnings for security, safe haven, and connection that express our common humanity, civil marriage is an esteemed institution, and the decision of whether and whom to marry is among life’s momentous acts of self-definition.

I’d like to believe that the sixth grade census of today has a more progressive take on things than it did back in my day, but I’m glad that the kids who are starting to discern who they’re going to be, and be with, in this world can go ahead and make it Facebook official.