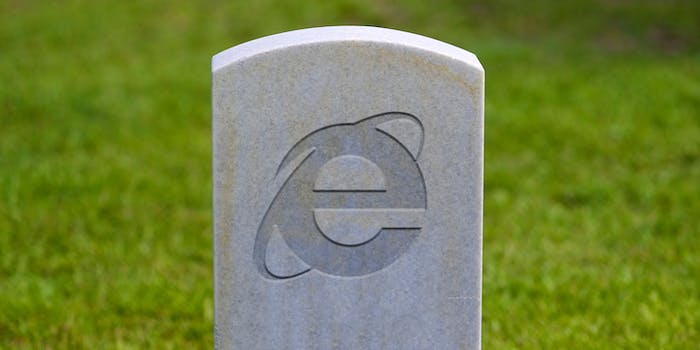 It's the end of an error.

It’s the end of an error.

Microsoft announced on Wednesday that they will finally be getting ready to kill Internet Explorer, and it’s about time. At the moment, the company is currently developing a new browser tentatively titled “Project Spartan,” which Microsoft eventually intends to replace Explorer. However, the browser isn’t going quietly: Windows 10 will still include IE when it ships—though Spartan (or whatever Microsoft’s new browser ends up being called) will be 10’s primary feature.

Even as Internet Explorer clings to life, though, it’s hard not to feel as if it’s on its last legs. Microsoft has been hinting at this for awhile now, after multiple efforts to rebrand the product have failed. At one point, Microsoft considered just slapping a new name on IE, since its reputation was so toxic, but by now, it’s clear that all efforts to save Explorer have pretty much failed. As Microsoft begins ramping up its efforts to win back the American public’s affection, putting the flawed browser out to pasture is key to the company’s continued success.

In that spirit, here is a brief survey of the worst problems ever to plague the infinitely frustrating Internet Explorer, may it rest in pieces.

Of all the most pertinent issues associated with Internet Explorer over the years, this one may be the most serious. Forget for a second that IE was slow, inefficient, or lacking in multiple other ways. The fact is that it was also historically the least safe browser around. That wide reputation, in turn, made it even less safe: Internet Explorer was the de facto browser to hack. While you could get hacked using another browser, you have a much better chance of getting hacked when using IE.

This actually got so bad several years ago that the federal government specifically warned against using Internet Explorer. And you know things have gotten bad if even our technologically inept government has warned us that there’s a problem.

While some of the bugs associated with Internet Explorer ended up putting users’ personal information at risk, IE was also susceptible to other, more common strains of bugs. “Microsoft fixes bugs in Internet Explorer on a fixed schedule,” explains Michael Horowitz of Computer World. “But, bugs are not discovered on a schedule, which means IE users remain vulnerable to known bugs until the next scheduled bug fix … Neither Firefox nor Chrome, my preferred browsers, are locked into a schedule.”

Thus, not only has Internet Explorer proven to be incredibly prone to glitches, but its errors weren’t even dealt with in a timely manner. In essence, it’s a case of adding insult to injury.

You can’t be a great web browser without great features, but apparently, no one told Microsoft that when it was designing Internet Explorer, because IE’s features have been nothing if not haphazard over the years. Microsoft likely didn’t anticipate the rise of apps, which would come to be commonplace with other browsers; by the time the company caught on, Microsoft was already hopelessly behind. A race requires the ability to keep up, not hope others wait for you while you catch your breath.

In 2012, Whitson Gordon at Lifehacker pointed out a plethora of features that IE9 didn’t have, which was marketed as the “new and improved” version of Internet Explorer. However, IE9 still couldn’t sync bookmarks, passwords, preferences, and other data to different computers. It couldn’t pin tabs to the side of your tab bar. It didn’t do spell checking. It didn’t save sessions automatically. And its extension library was less than impressive. And again, this was supposedly an upgrade.

Internet Explorer has tried to take cues from its competitors over the years, steadily adding more features after the likes of Chrome, Firefox, and Safari added them first, but their efforts have been too little too late. In 2015, they are now all but obsolete.

Answer site Quora claims that somewhere along the line, Microsoft decided Internet Explorer was “already sufficient for the average user.” This lackadaisical approach eventually brought about the “restructuring of the Internet Explorer team, with the efforts focused elsewhere, and Internet Explorer informally dubbed to be in a “maintenance mode,’ indefinitely.”

This is a simplistic reading of Internet Explorer’s approach to updates over the years, but it’s also a fairly accurate one. While Microsoft served as a pioneer in the modern tech world, the company got sloppy when it came to Internet Explorer.

“By the time Microsoft released Internet Explorer 6 in 2001, complete with lots of new features for web developers, since there was no competition and they had a 95 percent market share, Microsoft just stopped trying—seriously, it did nothing for five years even after Firefox was released, and geeks started migrating left and right,” notes the Internet-savvy site How-To Geek. “It took five years after IE6 for Microsoft to finally get around to releasing IE7, which added tabs and made the browser slightly more tolerable, but for web designers it was still a nightmare to deal with, and only complicated the issue since now you had to make pages render correctly in two lousy browsers instead of just one.”

A lot of these issues were fixed two and a half years later with the release of IE8, but by then, most PC users had moved on to the more reliable Chrome and Firefox.

Last year, Press Up summed up the problems with Internet Explorer’s attempted updates, arguing that no matter how hard Microsoft worked to successfully update the browser, their approach was always derailed by the same issues. As the website’s Fred Meyer saw it, the biggest problem is that “half the stuff that works in the latest IE version is broken in earlier versions,” and “a small percentage of the stuff that worked in older IE versions is now broken in later IE versions.”

Meyer further explains that this is part of a vicious circle for Microsoft, one that’s increasingly abusive for its users: “Microsoft is in the habit of organizing a big publicity blitz around every major IE version release, with the inaccurate promise that it’s finally the IE version that’s as good as its competitors.”

In the aforementioned Press Up piece, Meyer also states, “When you build a website, IE remains the only browser for which you hold your breath to see how it’ll look. Firefox and Chrome will look quite similar, perhaps with some minor differences; IE remains a crapshoot.”

This troublesome detail encapsulates the final reason why Internet Explorer is on its last legs: The browser is a wreck when it comes to compatibility. Because it’s always been lacking in features and consistently behind in updating them, IE has transformed into a desperate, self-contained monster.

Gordon probably put it best at Lifehacker: “The problem is that when Microsoft innovated, they did so with little regard to web standards.” Or, to put it another way: Microsoft has let Internet Explorer remain an obtuse roadblock standing in the way of efficient Internet activity. Microsoft never paid attention to the way the web changed over time, which is why Explorer got left behind. This doesn’t just apply to the average web designer either. Anyone trying to build a successful website is likely to run into trouble if they’re doing it with Internet Explorer.

But what if you you’re not an expert web designer? What if you just want to be able to navigate easily between your work computer and your home computer, without running into arduous adjustments between locations? Well, no surprise: Internet Explorer isn’t any better at this either. In his Computer World piece, Horowitz concludes, “The most popular operating systems are, I believe, Windows XP, Windows 7 and OS X. Of these, the latest version of Internet Explorer, version 9, runs on only one. Many people use more than one computer and are likely to deal with more than one operating system. Firefox and Chrome provide a cross-platform experience (including Linux) that Internet Explorer does not.”

We should begin preparing the funeral pyre now. Internet Explorer is dying, and when it has breathed its last breath, the Internet will be a better place for it.

Photo via Tom Woodward/Flickr (CC BY 2.0) | Remix by Jason Reed