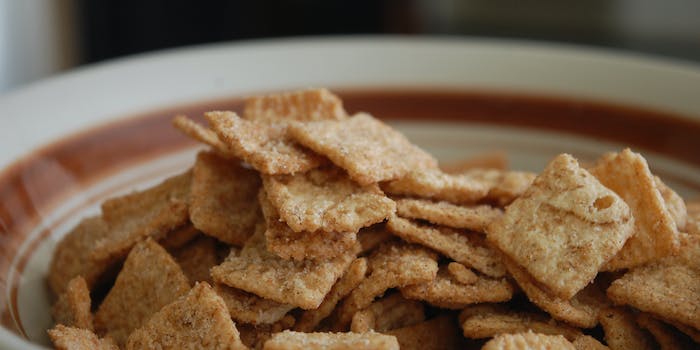 This week on the internet: Jessica Walter, David Dobrik, and the shrimp cereal saga

Plus: Boat stuck in the Suez Canal memes.

This was a bad week online

This week was, unquestionably, a bad one. First, we saw the quick rise and fall of a Twitter Character of the Day: The guy who says he found shrimp tails in his box of Cinnamon Toast Crunch cereal. The photos he posted of said cinnamon toasted shrimp tails went viral and led to a public statement from the CTC brand. The story had a few twists—he’s married to Topanga from Boy Meets World? His rap name is “Hot Karl?”—before it took a darker turn. On Wednesday, multiple women began tweeting about their experiences with Jensen Karp. They claim he has a history of abusive and manipulative behavior. Karp has not publicly commented on the claims.

This story is, unfortunately, not rare. The first big Twitter character of 2021, Bean Dad, was promptly Milkshake Duck’d. And we’ve seen many of these instances over the years of a person going viral before we start to learn about their past. Karp was also not the only man that people called out this week; David Dobrik posted another apology after a former member of his Vlog Squad, Dominykas Zeglaitis, was accused of rape (more on that, below). But people were less than satisfied with his apology video. And then men’s publication MEL magazine (where a few former Daily Dot staffers worked) announced it was laying off its editorial staff and seeking a new owner after its partnership with Dollar Shave Club ended. MEL regularly covered weird internet culture stories, and people mourned the abrupt ending. Then the week got even worse as news broke on Thursday afternoon that Jessica Walter, who played the best character on Arrested Development, died at the age of 80. See? Bad week. And we still have all of Friday left.

Considering that TikTok has been saturated with astrology lately, it’s no surprise that people are becoming interested in numerology, too. This ancient practice is thought to be created by the Greek philosopher Pythagoras, who believed that everything in the world could be measured by numbers.

The issue with the David Dobrik apology

David Dobrik posted another apology video on Monday, addressing his initial response to allegations of rape against a former member of his Vlog Squad.

As reported last week by Insider, a woman claims that in 2018, Vlog Squad member Dominykas Zeglaitis, known as Durte Dom, raped her during a party. In a seven-minute video, Dobrik explains that he wanted to apologize more respectfully, and that he “fully” believes the woman’s allegation, which was not really the sentiment in his first apology. Dobrik also acknowledged other women who had voiced their own concerns about Zeglaitis in 2018, and he apologized for not believing them, as well as going on to make jokes about sexual assault for content. Many commenters called out the fact that Dobrik is doing the apologizing and taking accountability but not Zeglaitis, who has been accused of a crime. YouTuber Chris Klemens pointed out the impulse in vlog culture to call allegations of grooming or assault “drama.”

From Sherlock Holmes to Crimson Peak, Hollywood is obsessed with Victorian period dramas. In this week’s episode of Behind the Seams, we take a look at the costume choices behind popular Victorian movies.

Zack Snyder’s Justice League is full of Snyder’s trademark slow-mo, a film technique he uses for both storytelling and flourishes. That technique, along with Wonder Woman’s depiction in the film, is fueling a new TikTok trend.

Composer Tom Holkenborg included a new theme for Wonder Woman in the Snyder Cut called “Wonder Woman Defending & Rough Beast.” The standout moment arrives around the 2:00-minute mark as a woman’s voice emerges in a cry. Even if you didn’t know the name of the song, you’d probably associate that cry with Wonder Woman because it tended to pop up whenever she was about to do something dramatic. TikTok user @tanners.tiktok first posted a video that includes the caption “Wonder Woman walking into frame in ZSJL” set to the cry from “Wonder Woman Defending & Rough Beast.” Since posting the video a few days ago, hundreds of new TikToks using the sound clip have emerged as people do ordinary things while the music plays, a nod to just how little it took Wonder Woman to do for the music to start playing.

The ship that got stuck in the Suez Canal released a flood of memes.