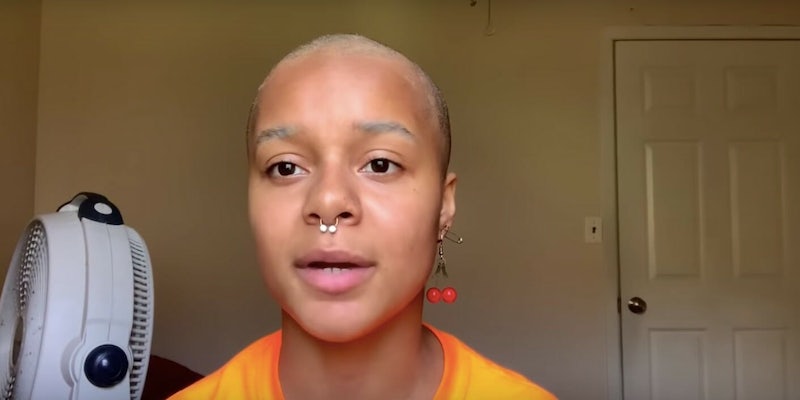 She was putting a relaxer in her hair.

The latest viral video has Twitter shook. Instagram influencer Lori Faith live streamed herself putting a relaxer in her hair. In the middle of the broadcast, her hair begins to fall out.

The video was captured and posted to Twitter by Faith’s friend, @ajrosesolis, who thought Faith was putting bleach on her hair. Faith later confirmed that it was actually the chemical straighter known as a relaxer.

“Lmfaoooooo so my friend was bleaching her hair on live and this happened,” @ajrosesolis wrote.

Lmfaoooooo so my friend was bleaching her hair on live and this happened pic.twitter.com/Rc79tEfeOT

As soon as Faith realized what was happening, she let out a gasp heard throughout all of the Twitter-sphere.

Users pointed out that mixing a relaxer and bleach is always a deadly combo.

Hi! Cosmetologist here. Bleach + relaxer always equals hair loss. The chemicals hate each other. Atleast you can pull off the bald look!

When she kept combing as if it’d would grow back or something pic.twitter.com/64c89M2vpH

She was in shock, damn, give her a minute

Faith told her Instagram followers that she had to shave her head after the incident.

hi this me im a dumbass https://t.co/7bJyDIJvsc

She later posted an Instagram photo with a newly shaved head, still in shock over what happened.

People began complimenting her on how good she looks bald.

“She lucky she got a face that can rock the baldinnie,” one user wrote.

Faith then posted a YouTube video detailing what exactly went down.

Faith said she first dyed her hair blue then attempted to bleach it. But rather than getting rid of the blue, it severely damaged her scalp. So she tried to put a relaxer in it.

As she began to comb the relaxer through her hair, she realized her hair was falling out. She then rushed to the shower to wash the product out of her hair. As she washed out the product, the rest of her hair fell out too.

Her mother, who is also bald, came to her aid. Faith is now looking at the bright side of the situation.

“I thought I would just have a really really short haircut with color,” she said in her YouTube video. “I feel like this was a good mistake because now my hair can grow naturally.”

She admitted she was afraid to go out into the public with her new do, but the positive feedback she received via social media made her feel better.

“It’s not a bad thing ’cause there’s a lot of people that are bald, not by choice,” she said, revealing that her mother has been bald since the age of 11. “Don’t put a relaxer in bleached hair, don’t even put relaxer at all unless you’re professional, because this is what you will look like.”