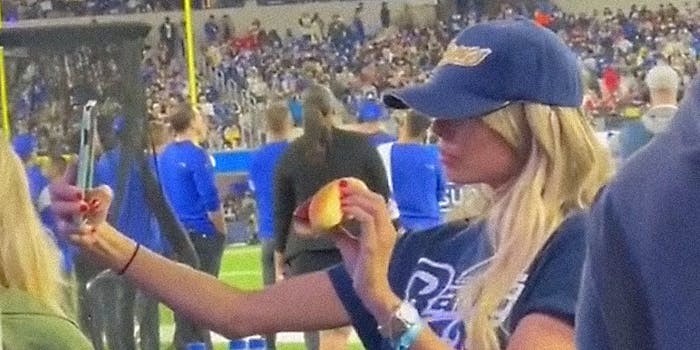 'Going to the Super Bowl to spend 10 minutes taking a selfie with a hot dog.'

The popular TikTok account “Influencers In The Wild” roasted a woman, who it implied was an influencer, for taking selfies at the Super Bowl with a hot dog.

@influencersinthewild is a social media brand owned by @tanksinatra, and it regularly posts videos of people who are spotted in public seemingly creating content for social media. The TikTok account has 2 million followers.

Its video of a woman at the Super Bowl game taking a selfie with a hot dog while players are on the field behind her got over 2.4 million views since being posted on Monday.

A text overlay mocks the woman: “I wonder if she ever took a bite of that hot dog.” It’s unclear who the woman is, or if she is even an influencer.

The video sparked a rift in the comments section. Many commenters similarly poked fun at the woman, complaining that she seemingly had a seat people would kill for but was too absorbed in social media to enjoy the game.

“Going to the Super Bowl to spend 10 minutes taking a selfie with a hot dog… I hate this generation,” @legendaryld_ commented.

Others, however, came to the woman’s defense and urged people to refrain from being judgmental.

“Ya’ll are so quick to hate on someone for living their life how they want to,” @disneylocal said.

“And we are all sitting on the toilet, or couch, judging another person film someone filming themselves with a hotdog. #gopackgo,” @nardvillain commented.

The Daily Dot reached out to @influencersinthewild and @tank.sinatra for comment via TikTok message.