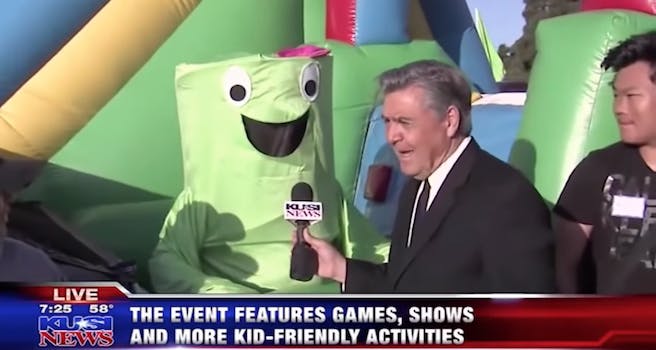 Who knew talking about inflatables would prove so difficult.

It seems like a simple enough assignment. A company was setting up inflatable obstacle courses and bounce houses in San Diego, so local news station KUSI sent a reporter down to get some footage and interview the people putting it together. It’s the kind family-friendly story you see on local news all the time. Unfortunately, things went off the rails immediately and each passing second became more and more cringe-worthy.

Things got off to a rough start when Good Morning San Diego anchor David Scott decided to open with a joke about how economic inflation is usually seen as a negative thing, but in this case, inflation is a good thing. It’s not the best joke ever but, again, it’s the kind of thing local news anchors are famous for. Here’s what Scott actually said:

“You know, usually when you’re talking about the world of inflation, you guys, you probably notice, is that a good thing or… not a good thing? Inflation?”

OK, so not the best delivery of what’s already not a great joke, but you can kind of see what he was going for. Unfortunately, the anchor back in the station couldn’t. After an awkwardly long pause, he finally says, “I’m sorry, the question again, Dave?”

At this point, it might have made sense to just move on, but Dave is determined.

“Is inflation in our world a good thing, or not a good thing?” he asked, apparently unaware there is a word in the English language for “not good.”

OK, surely now his fellow reporter will get what is happening and say something like, “Well, economically speaking, it’s usually bad.” Or simply, “Not good.” Hey, if he really didn’t understand what his colleague was looking for, why not throw the ball back in his court with a classic “You tell me.” That would have worked just fine. Instead, he starts off by saying:

WHAT?! NO! Come on, man, can’t you see your friend is dying? Is there some internal beef at the station that we don’t know about? Why would you do that to this poor guy?

“It depends upon what the topic is,” says the cruel, cruel man. “What are we talking about? Generally? Inflation? If you have an inflatable boat, that’s a good thing.”

Surely, now they will move on, right? Wrong. Dave is undaunted. Although he should have been daunted. So very, very daunted.

“But ah, generally,” he says “When you hear about inflation, something good come to mind?”

“For me? Yeah,” says the other anchor, who clearly just wants to watch everything burn.

“Yeah…” Dave says with a sigh, “Well let me tell you that you’re right about… if you say ‘good,’ you’re right because this is the world of inflatables.”

Thus ends the greatest debate about inflation to ever take place on local news.

At this point, even the most sadistic viewer has to be hoping to see Dave turn things around.

Dave does not turn things around.

At first, he seems OK. He asks the volunteers who set up the inflatables to give themselves a round of applause, which is a great trick when you’re trying to buy yourself some time to recover, or maybe figure out how to get revenge on a co-worker.

But then he decides to ask one of the volunteers, “What kind of fun do you think you’re going to have today?”

What “kind” of fun? What does that mean Dave? What answer could he possibly be hoping for? Good fun? Inflatable fun? Fun fun?

The woman he asks is clearly as baffled as the rest of us.

“Um, lots of fun?” she ventures, coming up with what is probably the best answer.

Dave seems to accept this answer and declares “lots of fun” to be a “good kind.” He then moves on to another volunteer and just sticks a microphone in her face without asking anything.

The woman quickly realizes he wants her to answer the same question which, let us not forget, is “What kind of fun do you think you’re going to have today?” She tries to come up with some sort of answer about helping families or kids enjoy the day, but we’ll never know for sure. Dave apparently got all he needed with the world “Helping.”

“Helping everybody,” he says and moves on to his next interviewee.

This woman decides to hit Dave with his least favorite response. “I didn’t hear the question.”

Dave repeats the question and the woman has no response. Which is totally reasonable.

“Bouncing?” someone bravely volunteers, which is as good a response as any.

Just when you thought things couldn’t get any weirder, Dave decides they need something more, and the only way to get it is by leading everyone in a magic chant. That’s right, a magic chant. A magic chant that goes a little something like this:

Now it’s time to see what we see

Amazingly enough, people play along with this bit.

Well except for this guy. This guy ain’t havin’ it.

But despite this man’s refusal to participate in the dark arts, the summoning spell works, and calls forth the, no doubt hastily named, entity known as  “Mr. Wacky.”

And, surprise surprise, Mr. Wacky totally saves the day. He not only explains what is going on, but seems to be genuinely excited to be there. He even gets everyone to do the “Mr. Wacky dance.”

One man on Twitter put it best when he said, “It’s never a good sign when Mr. Wacky is the one who steadies the ship.”

It's never a good sign when Mr Wacky is the one who steadies the ship.

In fact, people seemed to feel pretty positively about Mr. Wacky in general.

OH GOD I CAN'T TAKE IT

The appearance of Mr Wacky was a blessed relief

I've never seen a segment bomb so hard in my life.

To his credit though, Mr Wacky remembered the most important rule in performing: you gotta COMMIT to the bit.

“Mr. Wacky saved the day.” Is something that should only be said as code for I’m being held hostage, or just a fact about this in 2018. Wow. Just. Wow

All of which means reporter David Scott may need to start working on his resume. Mr. Wacky might just be coming for his job.