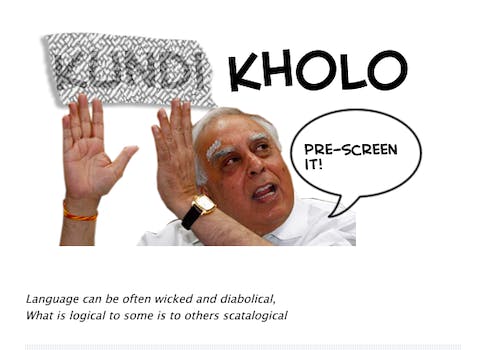 People took to Twitter and Tumblr to protest rules that could curtail free speech in India.

Outraged Indians took to Twitter yesterday and today with the hashtag #IdiotKapilSibal, protesting India’s unpopular telecommunications minister and his stated goal of restricting online criticism of his government.

Specifically, Sibal wants social media sites to pre-screen user content before it can be published, prohibiting anti-government remarks from ever seeing the light of day. He met yesterday with representatives of Google, Microsoft, Yahoo and Facebook to discuss this goal.

The hashtag has been used on Twitter over 12,000 times since yesterday, and both it and “Kapil Isbal” have been trending topics in India since then. A “Kapil Sibal is an idiot” Facebook fan page has already cropped up.

India has had recent run-ins over free speech issues on the Internet. In April, the country unveiled Internet regulations which prohibited a wide range of online behaviors, including publishing any online message that “threatens the unity [or] integrity” of the country, or even remarks considered generically “disparaging.”

As the hashtag suggests, plenty of Internet users are expressing their anger by making fun of Sibal. One Tumblr user created Kapil Isbal Prescreens today, in which  a photoshopped Sibal holds a screen over words and images he finds offensive.

“This Tweet shall appear blank till #idiotkapilsibal has screened it and approved it for public viewing,” tweeted nikster007.

Photo from Pre-Screen This! Tumblr