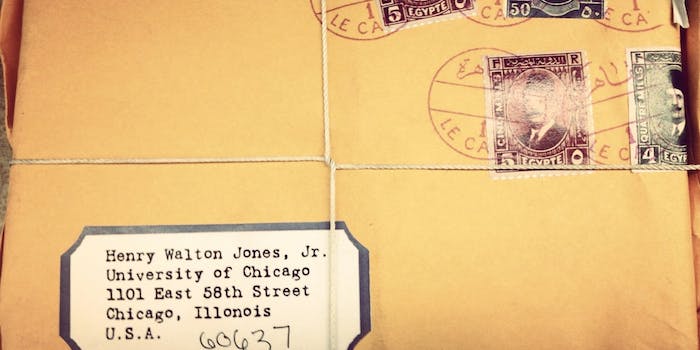 Sometimes, when a mysterious journal intended for a globe-trotting archaeologist shows up in your mailbox, it’s the start of a grand adventure. Sometimes it’s just a postal error.

Sometimes, when a mysterious journal intended for a globe-trotting archaeologist shows up in your mailbox, it’s the start of a grand adventure. Sometimes it’s just a postal error.

The journal—a near-perfect replica of the one given to Indiana Jones at the beginning of Raiders of the Lost Ark—was on its way from an eBay user in Guam to a customer in Italy. Because the journal itself was intended to look like the one mailed from Professor Abner Ravenwood to his protégé, Indy, it was actually addressed to the university. Thinking the address was legitimate, the U.S. Postal Service forwarded it to the admissions office.

Although admissions staffers at the university nearly missed the Indiana Jones connection when the package first arrived, they soon realized its significance: Henry Walton Jones Jr. is the full name of the school’s most famous, fictional alumnus.

After finding similar journals on sale as prop reproductions on eBay, admissions officers correctly theorized that the journal may have come to them as shipping error. But they still turned to the online world to help verify the journal’s origin.

Verification finally came in the form of a reply from eBay user Paul From Guam, who came forward as the sender of the journal.

“According to Paul, this package was en route from him in Guam to his intended recipient in Italy … when it must have fallen out of the package in Hawaii,” the admissions office wrote on its Tumblr page. “Our address had originally been put on the manila wrapping of the journal just for cosmetic effect. We believe the post office wrote on our zip code on the outside of the package and, believing the Egyptian postage was real, sent it our way.”

Although the cryptic package wound up having a fairly mundane origin, it didn’t stop Internet commenters from coming up with a wide range of theories about the journal and sending them to a special email set up by the the admissions office.

Some users suggested it was part of an elaborate viral marketing campaign to promote a fifth Indiana Jones film—though that idea was shot down (thankfully, in this writer’s opinion) in a response from LucasFilms. Others theorized it was part of an elaborate alternative-reality game. Some optimistic folks even went so far as to suggest that Harrison Ford himself made it (a favorite theory of the admissions staff, but one they knew was probably wishful thinking).

Although the mystery of the Indiana Jones journal was largely a diversion for admissions staffers before their holiday break, the school did get something out of it. Paul From Guam said he will make a new journal for his original customer in Italy, allowing the school to hang on to its copy. The University plans to put it on display at their Oriental Institute because, as Indy would say, “it belongs in a museum.”

Photo via the University of Chicago Admissions Office