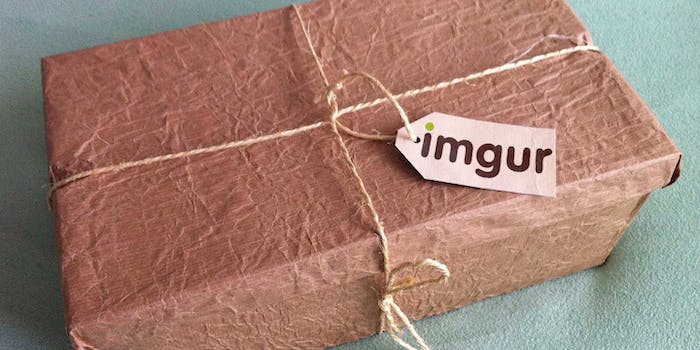 I’m still waiting for my valentine from an Internet stranger

But everyone else is feeling the love.

The best holidays have presents. There’s nothing like the thrill of getting back home after a long day at work to find a package at your doorstep or unwrapping an adorably decorated parcel only to discover that someone picked the perfect gift for you. And Imgur is helping people get into the giving spirit around occasions like Christmas, Valentine’s Day, and more.

There’s a strong sense of community on the online image-sharing website. Denizens of the Internet come together to upvote people’s heartwarming stories, build up some of the hottest memes, and much more. The bond between Imgurians is a strong and universal one that has translated into IRL gift exchanges to celebrate those connections.

This past Valentine’s Day, Imgurian MartynMage put together a gift exchange. The instructions were pretty simple:

Roses are red, violets are blue,
Let Cupid Dickbutt find a friend for you,
Simply add your info, let him do the rest,
We’re sure you’ll be suitably impressed.
Whether you’re single or taken, or maybe “it’s complicated”,
Sign up to send some love, we think you’ll be elated!

It sounded like a pretty sweet deal, so I decided to participate in the swap. I submitted my name and address through an online form, along with any allergies (none) and any strong dislikes (I’m not that picky—just no olives, please). Soon afterward, I got an email letting me know which Imgurian I would be getting a gift for, along with her info. She didn’t want anything pink, as she hates it with a passion. Easy enough, right?

This isn’t the first time MartynMage has orchestrated a gift exchange. The Imgurian, active in the community for just under three years, started the swaps back in 2014. He was familiar with RedditGifts, the gifting-and-receiving project for redditors, and wanted to do something for his Imgur family. So the 2014 Imgur Secret Santa was born. But it wasn’t a cakewalk.

“In 2014 I faced the issue of actually distributing the matches for the exchanges. I ended up spending 2-3 days enlisting the help of almost 100 people to help send out match emails,” he wrote in an email to the Daily Dot.

Having gone through all the challenges of planning the inaugural Imgur gift exchange, MartynMage knew how to tackle the 2015 Secret Santa. Another Imgurian helped him out by writing a script that automatically emails matches to users. He planned for a few months in advance and even built a proper website, Gift a Giraffe. The 2015 exchange had over 10,000 participants.

And soon enough, MartynMage was already ready to go for the 2016 Valentine’s Day Gift Exchange.

“Generally, the greatest challenge is actually promoting the exchanges—creating a post on Imgur that hits Most Viral is crucial to the growth of each event, which can be a tough challenge,” he said.

Thankfully, he had Imgur Director of Community Sarah Schaaf on his side. The exchange showed up on Imgur’s blog, and Schaaf helped create a banner that sat at the top of the website for the Valentine’s Exchange that directed interested parties to the Gift a Giraffe site.

Schaaf thinks that these exchanges exemplify what it means to be on Imgur.

“The community is the driving force behind Imgur,” she wrote in an email to the Daily Dot. “The majority of the time we see that people choose to use their anonymity on Imgur to be the very best versions of themselves. Unlike other social sites, there’s no pressure on Imgur to shape your personal brand or highlight only the most amazing moments in your life with your posts. People put a ton of time into surprising and delighting their fellow Imgurians whom they’ve maybe never met or even interacted with before.”

With a boost from Schaaf’s promotion, around 5,200 people from 105 countries all over the world signed up for the Valentine’s Day exchange.

Seeking a gift for my match, I did what any Internet-savvy and slightly creepy sleuth would do: checked her social media accounts to find a thread of interest. I checked out her Imgur profile, where you can see what users have commented on or upvoted. There was nothing all that helpful there—I found out that she’d worked in retail for over 10 years and hated it, along with some other small details. So I turned to her Instagram profile, which gave me a little more about her personal life, though not much.

It wasn’t exactly easy to shop for this woman I hardly knew. It’s like getting matched up with someone in an office gift exchange whom even your co-workers can’t give you any guidance on.

I ended up going to a gift shop and picking out an adult coloring books with colored pencils, along with some V-Day chocolate. It felt like a very safe gift, since those coloring books are all the rage right now. They’re therapeutic—a great way to just unwind for a bit. And who doesn’t want some chocolate for Valentine’s? I wrote a little note, packed up the gift, and sent it off to the given address. It was going to be late, so I messaged her on Imgur to let her know not to fret. 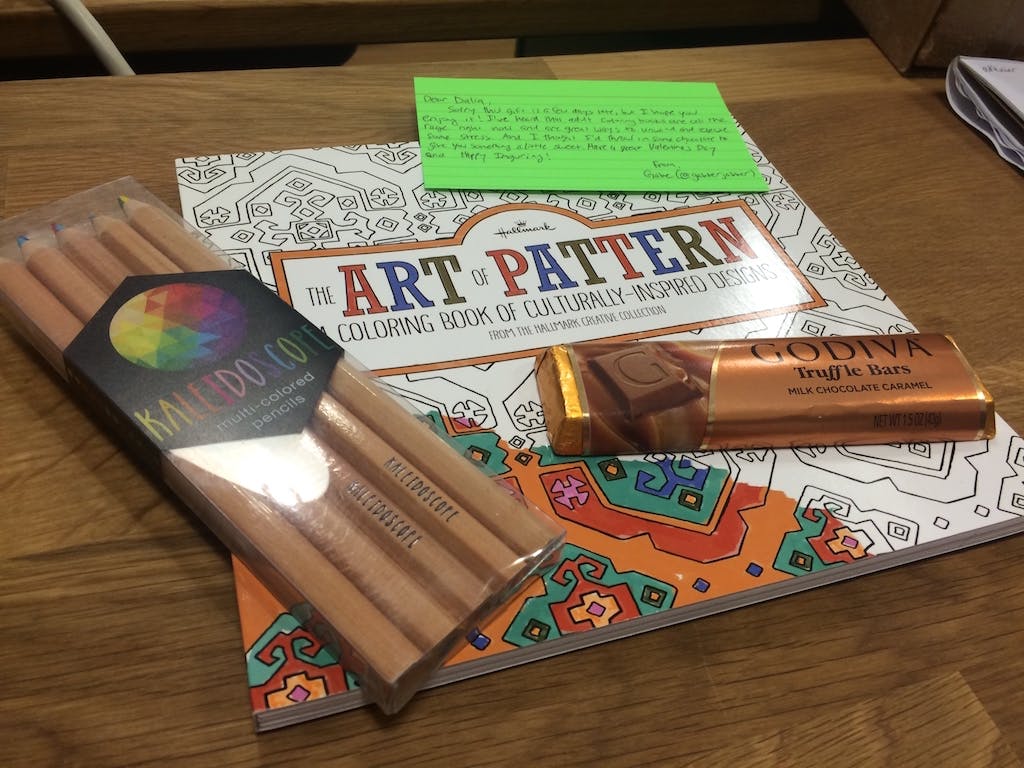 Valentine’s Day weekend came, and I was both curious and excited about what’d I get. But I also came to the realization that my secret admirer was probably going to have an even harder time picking something out for me. My Imgur profile is practically blank, since I don’t engage in the community—I’m more of a lurker. That being said, you could easily Google me and find my Twitter and Instagram, which reveal plenty about my personality.

Alas, a week has passed, and still no gift or note to my Imgur inbox. But that isn’t the case for most Imgurians, who have gotten an array of fantastic presents.

The week leading up to Valentine’s Day, Imgur was flooded with pictures of what people had gotten or received for the Gift a Giraffe exchange. Lots of chocolate, lots of hearts, and lots of your typical V-Day goods. But there were other gift-givers who deserve gold stars for extra effort.

“I love them! There are so many thoughtful gifts! The handmade gifts or those with a lot of thought put into them absolutely amaze me. There are users who go above and beyond with what they can afford to do,” MartynMage said.

Schaaf even participated herself, sending her lucky match chocolate bars made in San Francisco along with some sweet Imgur Swag. And Bill Nye got in on the shindig, too, treating his match to the delightful surprise of having the Science Guy as your valentine.

One of the most heartwarming gifts came from an Imgurian who saw that their match had posted an old photo of their grandmother and wanted help with colorizing it—they rendered it in both color and black-and-white because they weren’t sure what their match wanted.

Unfortunately, I wasn’t the only one who didn’t end up with gift, though I was in the minority, according to MartynMage.

“As of right now, the first exchange you do can always be risky, I have about a 85 percent success rate with all new users, which is phenomenal,” he said. “However, after you’ve participated in a single exchange and confirmed your gift as sent (with tracking), you are placed on a confirmed senders list, meaning that for all future events you will only be matched with other confirmed senders, which vastly increases your chance of getting something in the future.”

So it looks like I was just a little unlucky. I also understand why my match might have bailed: It’d be hard to pick something out by taking a look at my empty Imgur profile. In some ways, it’s probably best that those that participate in the exchanges are active Imgurians. That isn’t to say that nonactive users aren’t going to follow through—but people who love Imgur will especially love picking out gifts for one another. And since I submitted the confirmation form, the next time I join in on the fun, I’ll be matched with someone a bit more reliable.

“It’s definitely a bummer not to receive something, but a lot of the joy is in participating with the community and planning what to send,” Schaaf said. “MartynMage, the Imgur user who puts together the exchanges, does an incredible job and he does it all because he loves the Imgur community. There’s no one I’d trust to do it better… We’re always learning with each one, and I’m excited to see them get better every time.”

MartynMage definitely has more plans for the future of Gift a Giraffe. He wants to implement a login option so you can set up a more comprehensive profile for your match to look at, a notification system, and a proper tracking setting. He also has a pretty sweet idea for the next exchange: a year-round international candy exchange, along with pen pal matchups and seasonal exchanges.