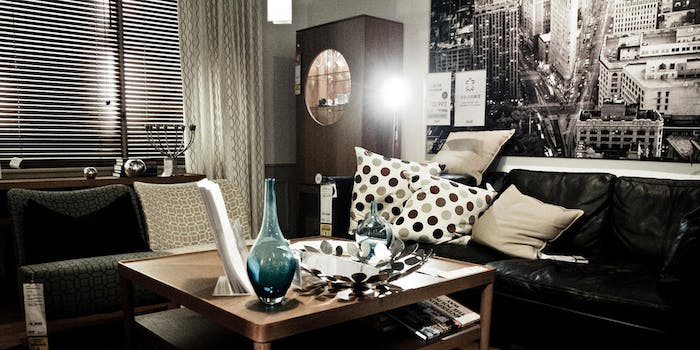 How not to hack IKEA

Correction: In addressing the recent settlement reached between IKEA and IKEAHackers, the author conflates trademark and copyright law. While IKEAHackers’s could have a fair use defense against a copyright infringement claim, as argued by the author, that was not actually the issue here. In its blog post about the settlement, IKEAHackers states that it’s a matter of trademark infringement. While fair use can be applied in some trademark cases, it’s limited to instances in which the alleged infringer is using another’s mark to accurately describe an aspect of its products or to identify the mark owner (as in a comparative advertisement). However, it’s worth noting that, as pointed out by reader Sarah Jeong and BoingBoing’s Cory Doctorow, it’s arguable whether IKEAHackers was in fact violating IKEA’s trademark, since the risk of confusion or genericization from IKEAHackers’ use of the mark was minimal. The headline of this story has been changed accordingly.

The original version of the story can be read in its entirety below.

According to last year’s annual report from Inter IKEA Systems B.V., 775 million people worldwide visited IKEA stores in 2013, generating almost $40 billion U.S. in sales. The Swedish meatball and furniture juggernaut uses 1 percent of the global timber supply, has become a pop culture icon, and can be found somewhere in the homes of almost every 20-something in spitting distance of an IKEA store.

Unsurprisingly for a brand this powerful, IKEA has generated legions of followers, including Jules Yap (a pseudonym), a fan from Kuala Lampur who started the IKEAHackers site eight years ago. After years of being allowed to blog about amazing accomplishments with IKEA furniture in peace, Yap has been forced to stop offering advertising on the site and radically curtail her activities in the wake of a battle over a cease and desist letter from IKEA.

IKEAHackers is an astounding wonderland of all the things you can do with IKEA furniture—from the small to large. Some of the “hacks” featured on the site are relatively minor, while others require advanced power tool use and other skills. The site features ways to customize, repurpose, and revolutionize IKEA classics like the BILLY bookcase, with documentation of hacks from all over the world.

IKEA insists that Yap was committing trademark infringement by using its products on a site for commercial purposes. Initially, the company demanded that she turn over the domain to them in addition to ceasing her activities. She worked out a deal with IKEA allowing her to keep the site, but only if she dropped all advertising. In a post explaining the situation for readers, she noted that IKEAHackers will live on—but elsewhere, and in a different form.

The situation highlights a growing problem online: Copyright bullying, with large companies like IKEA throwing muscle around to intimidate individual bloggers and small companies with legal threats. The issue is having a chilling effect on free speech online, and it’s threatening fair use doctrine, a critical part of the legal framework surrounding the use of copyrighted and trademarked material (like, say, IKEA furniture).

Many examples of fair use are easy to understand: A book review may quote a book, for example, for the purpose of discussion, as it could be difficult to criticize a novel without doing so. Likewise, a film or television critic might quote lines from a screenplay, and a newspaper might print a photograph of an art exhibit with a review. The grey area lies in what is known as transformative work, something that cannot be easily and cleanly defined, but that plays a critical role in creative expression and discussion.

In transformative work, copyrighted material is used in a new and innovative way to create a project that is substantively different from the original, even though it integrates copyrighted material. Transformative work is the pillar on which fanfiction is built, for example, but also parody, which often relies heavily on the source material. In both cases, the original material is credited while being used extensively, but the end product is radically different—and doesn’t affect the market for the source material. One might in fact argue in this case that Yap’s site was increasing the market for IKEA products.

Did IKEAHackers constitute an example of transformative work? Inarguably, yes. She was taking source material and radically transforming it to produce new things. While she was also profiting from IKEAHackers in the form of the sidebar advertising on the site, it would be difficult to argue that her individual profit was undercutting IKEA’s. In order to make the hacks featured on the site, people need to buy IKEA furniture, and thus, the site’s presence is, if anything, complementary.

Was IKEA bullying her? Absolutely, quite possibly because they plan on starting their own version of IKEAHackers—and perhaps they’re worried about her countersuing if they infringe upon her idea. IKEA might have been worried about liability issues related to modifications that might fundamentally damage or alter furniture, increasing the risk of injuries, but IKEA hacks are undertaken at the owner’s own risk, and IKEA’s furniture packaging clearly indicates the risks of using furniture for purposes it is not intended for, creating a very clean liability cover. Defenders of IKEA’s actions have also argued that the firm may be concerned about “genericide,” but IKEAHackers very clearly protects the brand name.

If you want to build a stainless steel outdoor table with the inexpensive LACK table as a base, there are directions. Also on the site: a flower pot lamp bundle, a sink upgrade, a complex wall system/entertainment center, a minibar, understairs shelving, and so much more. All are tagged with the names of the products used, carefully noting their origins as IKEA products. In each case, Yap and contributors take care to avoid genericizing IKEA and its products, instead stressing the brand and product names involved.

Was Yap too quick to settle with IKEA? Yes, and in doing so, she harmed the fair use community by creating another legal example of a fair use case in which a company won, and didn’t even have to go to court to do so. While she was in a difficult position because she couldn’t afford a costly suit where IKEA would likely have thrown considerable resources at her, her rapid capitulation set a poor precedent, and one that will be noted for future use.

Fair use hangs on a doctrine of both legal standards and precedents. Yap’s site fit the existing legal standards, and known precedents. IKEA’s victory in this case wasn’t just a bullying job well done, but a strike against future fair use cases that will be that much more difficult to win thanks to this one. Every time a case like this one is resolved in favor of the bully, it becomes more difficult to speak and create freely.

s.e. smith is a writer, agitator, and commentator based in Northern California who focuses on social issues, particularly gender, prison reform, disability rights, environmental justice, queerness, class, and the intersections thereof, and has a special interest in rural subjects.