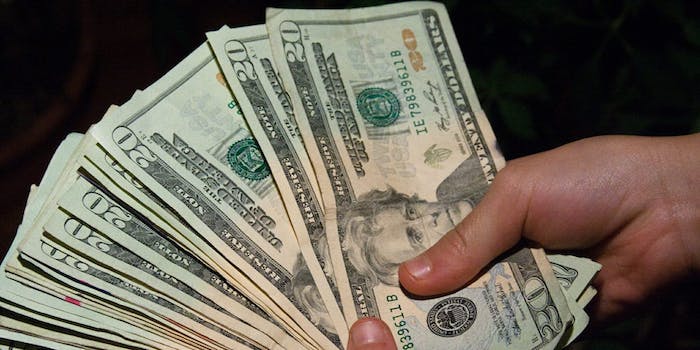 I.K. Enemkpali apparently would rather his fists do the talking.

In a fit of anger earlier this month, NFL linebacker I.K. Enemkpali cold-cocked Jets quarterback Geno Smith over an unpaid debt of $600, breaking his jaw and costing him several weeks of the 2015 season.

It all started for Enemkpali—who was immediately released by the Jets after the incident with Smith and currently is on the Buffalo Bills roster —when he was in college in 2011. While at Louisiana Tech, he started exchanging messages with a new Facebook friend named “Missy Lee,” who invited Enemkpali over to her home and said she would give him oral sex.

But Enemkpali later told police that when he entered Lee’s house he saw a person covered in a blanket and that the person wouldn’t remove the covering. Enemkpali grew uneasy and left. But Lee lured him back, and when Enemkpali returned, the person under the blanket again refused to remove it. When a ringing cell phone in the room lit it up, Enemkpali said he saw that the figure had facial hair and that another person had entered the room.

Enemkpali told police he started receiving threatening texts in which “Missy Lee” accused him of punching her and knocking out her teeth. “U are going to jail,” read one of the texts. He offered $500, but “Missy Lee” demanded $1,000 or the police would be called. “He [Enemkpali] would be ‘finished’ if that happened.” The texts were followed by phone calls from someone claiming to be the father of “Missy Lee” and demanding payment.

Enemkpali reported the incident to police three days after it happened.

Enemkpali was not charged in the incident, and the officer wrote in his report that he believed the man under the blanket, named Ketryn Anderson, was trying to use Enemkpali’s notoriety to force him to pay money.

As for Anderson, ESPN wrote that Anderson declined to comment until the network paid him and that he listed on his Facebook page that he was a senior pastor and the founder of Life Community Church in Shreveport, Louisiana.