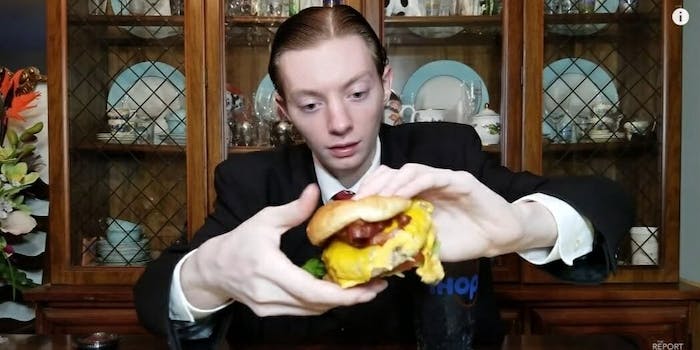 YouTube star TheReportOfTheWeek bought a classic burger with bacon and taste-tested it in front of his camera.

First, he compares the breakfast restaurant pivoting to burgers as a Mandela effect, and he extols the brilliance of the viral marketing scheme.

After all, how can that be denied when everyone is talking about IHOb and its burgers?

Then, the entire video devolves into complete sarcasm when he visits an IHOP and goes on and on about how crowded the restaurant is and what a madhouse it is inside with people hungrily waiting in long lines to get their hands on some burgers (in reality, the restaurant is completely empty). We watch him delicately eat the burger, tap his lips with a napkin, and sip from his drink. Finally, he gives us his verdict.

The burger, he said, doesn’t look pretty, but it’s tastier than something you might find at McDonald’s or Burger King. He calls it a diner-style burger, comparable to something you’d eat at Denny’s. He said he has no grievances with his meal, and said “for what it is, I can’t complain.” Except for the bacon, which he said wasn’t as crispy as he would have liked.

But according to this YouTuber, the burger is solid. “Delve into it,” he said. “Enter the rabbit hole. Find out what mysteries [lie] within them.” And if you can find a way to make yourself look as dapper as this YouTuber, the experience will be that much richer.