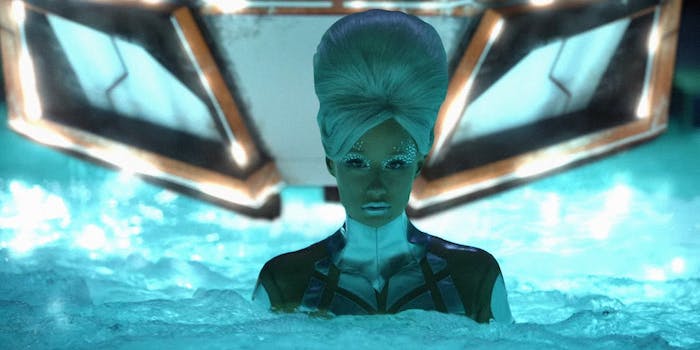 The race for “Song of the Summer” has officially begun, and making a bid for the title are Iggy Azalea and Britney Spears.

After teasing us with an upcoming collaboration, the Internet freaked out when the pop icon and Aussie cultural lightning rod released their much anticipated single, “Pretty Girls.” And as Stefon might say, the video for this song has everything: ‘80s fashion, freaky aliens, and obvious product placement courtesy of Samsung.

The only trouble? According to nearly everyone who has watched it, the video is terrible.

The Daily Dot’s own Jam Kotenko writes, “Once they arrive at the car wash and Brit starts body-groovin’, you eagerly await for her epic moves you know are bound to come because she’s Britney, bitch. All it does, however, is remind you that the ‘Baby One More Time’ video came out in the late ’90s and the fact that this new sequence reminds you of that is kind of sad.”

Despite these harsh words, Britney Spears’ status as a pop legend is not in question. Even when she’s repeating herself, you’re reminded of her long and storied career. As Kotenko herself puts it, she’s Britney, bitch.

Azalea, on the other hand, is another matter. Despite her meteoric rise, she’s attracted just as much criticism as praise. Yet considering that her Charli XCX collaboration “Fancy” was widely recognized as last year’s Song of the Summer, it would be shortsighted to count Azalea out just yet. Kotenko continues, writing:

As I play the video again and again to try and find a diamond moment in the rough, a kid approaches me to tell me she likes it, because “it sounds like ‘Fancy.’” If “Pretty Girls” ends up being 2015’s Song of the Summer, then we now know why.

However, Azalea’s problem isn’t just that her new song sounds like “Fancy,” because pop stars repeat themselves all the time. The problem is that Britney Spears came up in a time before the Internet could basically make or break your career—but Azalea was afforded no such luxury. The big question for the rest of her career, then, is not only can whether she escape the sound of “Fancy,” her first big hit, but whether can she transcend the Internet itself.

Or, to put it another way, the problem is that while Britney Spears is a bonafide pop star, Iggy Azalea is just a meme.

The line between “popular” and “good” has always been blurry in mainstream music. Azalea and “Fancy” personify this, as the song has become synonymous with her entire presence—frustrating but inescapable. Mic.com’s Tom Barnes may be even harsher on “Pretty Girls” than Kotenko for this very reason, noting:

Ensuring a song’s ubiquity goes a long way toward making people believe they like it. Studies show people are much more likely to respond positively to media they believe is popular. In fact, the human brain can also easily mistake the feeling of familiarity with actual enjoyment. The principle is called the “mere exposure effect,” and the music industry is well aware of its power to sway public opinion.

That’s why it makes sense to make “Pretty Girls” “Fancy, Pt. II.” The songs are almost compositionally identical, from the plastic ’80s synth to the rhythmic “hey” shouts on the chorus’ upbeats—which were themselves already well-established as successful elements in popular music. Those choices allow songs to feel familiar all the faster. And they suggest that “Pretty Girls” might enjoy a similar reception to “Fancy”—the popularity and the occasional burst of hatred.

Popularity and hatred also go hand in hand on the Internet, which is what makes it such a precarious place for up-and-coming artists, of which Azalea is a prime example. Since the release of The New Classic last April, she’s been a constant punching bag for Internet criticism, with critics taking issue with her vocal delivery (which borders on racial pantomime) and her appropriation of black culture.

However, the success of “Fancy” and the Ariana Grande collaboration “Problem” also made Azalea ubiquitous; “Fancy” itself has well surpassed the 500 million views mark, and Azalea has scored other hits with “Black Widow” and Jennifer Lopez‘s ode to the female posterior, “Booty.” As far as memes go, she’s a cultural phenomenon.

But the weight of the Internet has also clearly taken a toll on Azalea, culminating in a break she took from Twitter in February, amidst a well-publicized feud with fellow rapper Azealia Banks.

The Internet has been a blessing and a curse for Azalea because it is impossible to talk about her career without also talking about the Internet. In what other time could a white, female rapper from Australia come to dominate the pop charts so thoroughly? The initial curiosity and the cartoonish absurdity of her image is everything we continue to look for in what we consume online. She is the cat video of pop music. Even today, her stardom feels somewhat like a strange Internet experiment.

The problem is that while Britney Spears is a bonafide pop star, Iggy Azalea is just a meme.

Iggy Azalea’s ultimate memeification became evident in the form of a series of Vines which ostensibly show her rapping nonsense, as well as a bizarre deal with Uber that allowed the ride-sharing giant to debut her new song. Her embodiment of the Internet itself makes perfect sense: Memes may be the definitive version of pop art for the Internet era, and their intersection with pop music is a natural side effect.

Whether Azalea will be remembered as a joke, a fad, or a legitimate artist is an ongoing question, but her continued relevance to the Internet era is undeniable. When widely-respected artists like Miguel can’t escape the power of the meme machine, what hope does Azalea have?

Tracking the historical place of memes from Richard Dawkins to today, io9’s Annalee Newitz writes, “Memes are not like genes, and they evolve according to rules that we don’t yet fully understand.” Just because the rebooted Hamburglar is so hot right now on Twitter, there’s no guarantee that anyone will remember him as anything more than a curiosity the next.

Occasionally, memes do become a long-lasting part of the culture, providing opportunities to have intelligent discussions on who we are as a society. While #TheDress provided a nice barroom debate as we argued with friends and strangers, the Huffington Post’s Robert J. Rosenthal wrote that it was an indication of a truly global Web, in which we can be united over something as seemingly innocuous as whether a dress is black and blue or more loaded, like whether or not an Australian model turned rapper is racist. Rosenthal writes:

Traditional borders have been demolished by innovations in transportation, communication technology, the cultural influence of brands, and policy making. And yet social media, neo-tribalism, niche marketing, and the decline of liberalism have all combined to make it easier for online and real world communities to remain culturally and socially isolated from each other, convinced that their opinion is the right one.

As the BuzzFeed’s Ben Smith wrote after the Internet-breaking virality of #TheDress, it’s moment in the sun proved that in 2015, Internet culture is culture. “What might, a few years ago, have been a web culture phenomenon is today a cultural phenomenon, and the distinction between the two isn’t really intelligible,” Smith argued. But whether it’s #Dadbod or twerking, the bubble of virality bursts, both on the Internet and in real life.

And so will Azalea. Whether through virtue of her cultural-lightning-rod persona or the simple fact that she came up in a time when pop stars are valued just as much by the amount of YouTube hits they get as they are by quality, her place in Internet history is not rewritable. Some pop stars transcend memeification, and some don’t. However, none escape it, and it’s inevitable effects.

Unlike Britney, Azalea’s road to declaring “It’s Iggy, bitch” with any of the same credibility can only be paved with hashtags and retweets.