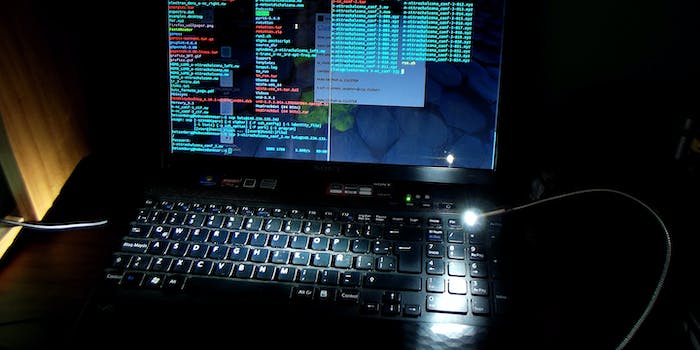 An absolute idiot’s guide to the Dark Net

There's no need to be afraid.

The Dark Net! It’s a thing you may have heard about. But what is it? Nobody knows. Nobody except me, a Dark Net expert. I don’t have business cards that identify me as such, but I’m going to order them soon.

Anyway, I know why you’re here: It seems like there are so many cool illegal activities in which to engage on the Dark Net, but you’re afraid of diving in headfirst. Do you run the risk of being hacked? What if Edward Snowden calls you a n00b? Is your mom naked on there somewhere?

Slow the fuck down with your questions, man! Expert that I am, I’m going to dispel all these mysteries in due course. Let’s start from the beginning.

1) Set up an onion router

Onion routers are key to Dark Net anonymity. Of course, you can’t just download such a sophisticated piece of equipment—you’ll need to take a trip to your local farmers’ market (or Whole Foods if you must) to acquire a suitable onion. In my opinion, red onions work way better than white, but to each their own. Back home, cut your onion into slices—not too thick, not too thin—and arrange them on top of your Internet router. Presto! Now you have many additional “layers” of security between you and the pesky NSA. (Note: You should change your onion at least every two weeks.)

2) Convert your money into Bitcoin Bitcoin is the virtual money of the Dark Net. It’s what’s known as a “cryptocurrency,” which makes it sound like the treasure in Dracula’s basement, but that’s only half accurate. (Besides, most vampires prefer using the more secretive Zerocoin for their shady real estate deals.) In reality, Bitcoins are bits of regular coins that can be inserted into your computer’s ethernet and USB ports to complete secret transactions with all your Dark Net buddies. Pretty cool, right? Dump out that jar of loose change you’ve been saving, then grab yourself a bolt cutter—or whatever that tool in the photo is—and start trimming! You should be able to produce a least four Bitcoins from any piece of this obsolete metal money.

3) Light some candles and strap on a headlamp In case you hadn’t noticed, “Dark Net” has the word “dark” right there in it. In fact, “dark” is the very first word in “Dark Net.” Seriously, check it out. Did you find it yet? No? OK, never mind. I really thought that wouldn’t be difficult, but forget it. Just trust me when I say that the Dark Net is, like, dark. That’s not a metaphor. I mean you won’t be able to see shit once you log on—unless you’ve got the necessarily illumination, as the savvy Dark Net denizen above clearly does. You might wonder why ordinary lamps or sunlight aren’t enough to penetrate the dark of the Dark Net, and honestly, so do I. The Dark Net is full of mysteries (and darkness). No matter how much we’d like to avoid it, it’s more or less inevitable that you’ll run into the spider at some point. When you do encounter the little guy—he’s the reason the Dark Net is occasionally referred to as the Dark Web, which doesn’t spin itself, after all—don’t be misled by his minuscule size. A single drop of the venom in the Dark Net spider’s bite can completely corrupt all the files on your hard drive and trigger an allergic reaction that causes you to upload a YouTube video of yourself attempting to eat entire jar of Nutella in a single sitting. To avoid that unfortunate outcome, pay him a few Bitcoin and any dead flies you have on you. Once you do, he’ll happily let you continue browsing.

Photo via Luis Romero/Flickr (CC BY 2.0)