The Ice Cubiverse is real: A truly mindblowing fan theory

Ice Cube is not a one-dimensional actor. He’s simply been playing a single character this entire time.

Since his breakout role as Doughboy in John Singleton’s Boyz n the Hood (1991), Ice Cube has maintained a steady film career, appearing in multiple movies almost every year since. On the surface, Cube’s performances appear to reflect a fictional version of his N.W.A persona. He’s terse, gruff, and tells it like it is—in every movie.

Enter the Ice Cubiverse: the cinematic universe in which every Ice Cube movie takes place.

And that’s no accident.

Enter the Ice Cubiverse: the cinematic universe in which every Ice Cube movie takes place. When arranged chronologically, the films create a single continuity, launched by Cube’s 1991 Hollywood debut. The Ice Cubiverse is a coming-of-age story that follows one man as he escapes his past, travels the world, and ages into dementia.

Some caveats: For narrative purposes, we’re only using movies starring Ice Cube. But believe that even if he makes a cameo appearance in a film, he is, most definitely, playing the same character. Additionally, every character will simply be referred to as “Ice Cube” for clarity.

At the end of Boyz n the Hood, Ice Cube is given an offscreen death two weeks after a rival gang from Compton kills his brother, Ricky. In an act of vengeance, Cube chases down the killers and executes them in a parking lot—and he’s forever changed.

“I ain’t got no brother. Got no mother, either. She loved that fool more than she loved me,” Cube tells Tre (Cuba Gooding Jr.).

As Ice Cube walks off, a title card informs the audience that he was murdered two weeks later. The truth is, Ice Cube was overcome with guilt over his brother’s death, and overwhelmed by the moral weight of having just taken a life. With that guilt, as well as the sadness of having lost his family, Ice Cube fakes his death and leaves his neighborhood.

With guilt over taking a life, as well as the sadness of having lost his family, Ice Cube fakes his death and leaves his neighborhood.

Unsure of where to go, Ice Cube lays low with his friend, Smokey, in Friday. The neighborhood is far enough away that Cube’s sure nobody will recognize him. Yet he still finds trouble as Smokey drags him into bad business with a marijuana dealer.

Similarly, in Next Friday the trouble comes looking for Ice Cube in the form of Deebo, a neighborhood bully who has just been released from jail. He stays with his cousin Day-Day (Mike Epps), but he can’t shake Deebo. Luckily, Ice Cube is able to foil him in the end. But it’s time for a change, and Ice Cube has to get out of L.A. once and for all.

His only way out is to join the armed services. 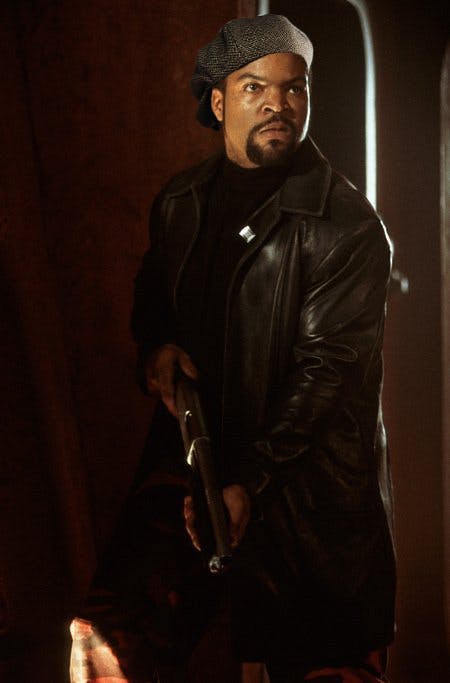 Ice Cube enlists in the Army just before Desert Storm. He excels during basic training, gets shipped out to Iraq, where he is quickly promoted to staff sergeant, bringing us to the events of Three Kings. The war has just ended, and American troops are getting ready to return home, but Ice Cube is disillusioned with his life in the U.S. is easily seduced by the opportunity to steal Saddam Hussein’s secret Kuwaiti gold.

He sees this as his best way out of the life he’s been trying to escape, until the plan goes awry, and one of his fellow soldiers, Troy (Mark Wahlberg), is taken hostage. Ice Cube is forced to devise a plan with Major Archie Gates (George Clooney). They are able to rescue Troy but must return the gold.

Cube is then instrumental in thwarting a plan to overthrow the president—but decides this is all too much.

Ice Cube goes back home and works in Hollywood as a military consultant with Major Gates but remains paranoid that he’s too close to the trouble of his youth. He decides to go back to the service, joining a top-secret special services unit. When we catch up with Ice Cube, a decade has passed, and he goes by “Inmate 3655” in a maximum security military prison in XXX: State of the Union. Due to a major attack on an NSA bunker, Ice Cube is brought back into his old unit, whose members aid him in a prison break. Cube is then instrumental in thwarting a plan to overthrow the president—but decides this is all too much.

With his record wiped clean, Ice Cube moves to the desert and starts a motorcycle gang called the Reapers in Torque. What was originally intended to be an innocent motorcycle club, however, turns to violence when a rival gang, the Hellions, shows up. Ice Cube develops a close relationship with Junior (Fredro Starr), who reminds him of Ricky, the brother whose death he has mourned since 1991.

The Hellions show up and steal bikes from the Reapers, resulting in a brawl at a popular biker bar. Ice Cube finds Junior dead after he had been strangled in the bathroom during the brawl. This triggers his guilt for yet another brother’s death. Ice Cube has to get away.

So he leaves everything behind except a video camera leftover from his brief stint in Hollywood. He starts working as a freelance videographer in South America with National Geographic. It’s a mostly peaceful time. Ice Cube gets to experience nature and coast along the Amazon River—until all hell breaks loose in Anaconda. The crew picks up a snake hunter (Jon Voight), the Ahab of this story, who obsessively chases an impossibly long snake that begins taking out members of Ice Cube’s crew one by one. Cube just wanted a soul-searching trip. After they kill the anaconda, he leaves South America only to learns that his father has just died.

Ice Cube must journey to South Africa to attend his father’s funeral in Dangerous Ground. He’s lost touch with his African family in the time he’s lived in America, and learns how to participate in their customs.

Trouble still follows Cube as he gets tangled in a battle with a local drug dealer. He helps his family break free from the oppressive drug lord; the violence reminds him of what he said after his brother Ricky died: “Either [the news media] don’t know, don’t show, or don’t care about what’s going on in the hood. They had all this foreign shit, but they didn’t have shit on my brother.”

He’s lost touch with his African family in the time he’s lived in America, and learns how to participate in their customs.

So Cube returns to the States to try his best at making a difference. First things first, he decides to finally get his degree in Higher Learning. Once he finishes his degree, Cube moves to Chicago and works in a Barbershop to pay off his student loans. He starts a few business endeavors, including a sports memorabilia shop in Are We There Yet? This affords him such luxuries as an expensive Lincoln Navigator, which is ultimately destroyed by two rambunctious kids on a road trip to see their mom, the woman of Ice Cube’s dreams (Nia Long, his Friday love interest).

Things have finally stabilized in Ice Cube’s world, and he’s grown fond of taking in the scenery of America on long road trips. Life is good. That is, of course, until he is pulled over by racist cops who plant a gun on him in The Glass Shield. 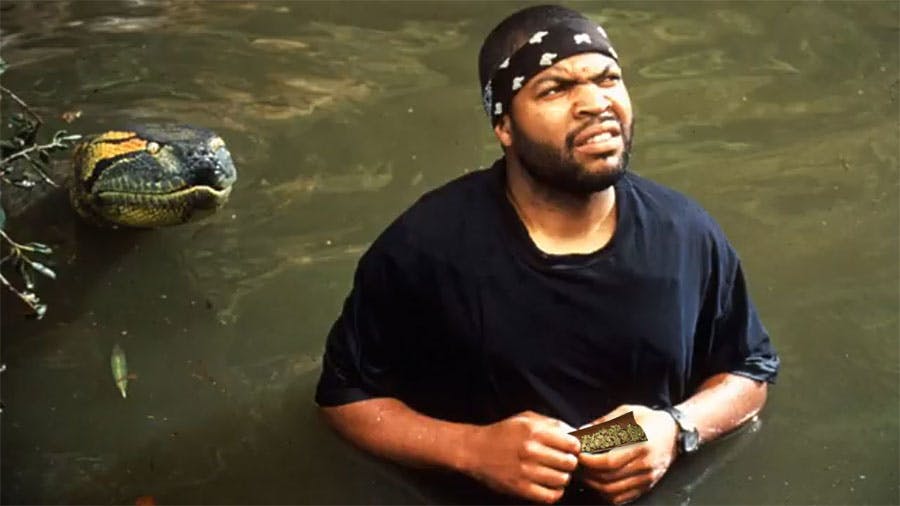 After he’s arrested, Ice Cube has to go through with a lengthy trial, where it’s revealed that the police planted the gun on him. This prompts him to press civil rights charges against the police. But he’s sick of this, and he realizes the only way he can make a difference is by joining the force himself.

The films Ride Along, 21 Jump Street, and 22 Jump Street all take place within the same five-year span. Because of the excellent work Ice Cube did busting a cartel headed by the insidious Omar (Laurence Fishburne), he was promoted to lead a special task force in Los Angeles. Witnessing firsthand what the drug trade did to his neighborhood growing up, he signed on to lead the Jump Street operation to attack the entire drug trade through special undercover operations in high schools citywide.

Side note: Ice Cube is afraid to let Ben (Kevin Hart) into his family because he knows nobody will ever replace Ricky. This is the one thing he can’t shake.

Flush with a newfound fortune, Ice Cube hears about new colonies on Mars.

After years of honorable service in law enforcement, Ice Cube retires and becomes a bounty hunter in All About the Benjamins, which leads to him running into an old friend, Day-Day (Epps from Next Friday), a con-man he has to bust. Together, they chase down a group of diamond thieves in an adventure full of murder and deception. Although Ice Cube has to arrest Day-Day to collect his bounty, they are able to keep the money they hid from the diamond thieves.

Flush with a newfound fortune, Ice Cube hears about new colonies on Mars. He has traveled most of the world at this point and figures a trip to a new planet would show him some new wonders; instead, it leads him to yet another prison in Ghosts of Mars, a result of the racial profiling that’s he’s had to deal with throughout his story.

While Cube is being transported, an ancient portal is opened, releasing martian spirits that possess human bodies. Overwhelmed, the colonial Mars police force recruit Ice Cube, who is known to have extensive special forces experience, to fight the spirits.

Although he survives, the battle leaves Cube broken, and he returns to Earth a changed man. He suffers from post-traumatic stress and Space Dementia, resulting in paranoid hallucinations. Despite this, he tries to go on with his life, only to be consistently foiled by a Coors Light bottle in the recording studio and on a beach vacation. The two (Cube and the bottle) are often found bickering over who is colder; Ice Cube never comes out on top of what seems to be an unwinnable fight.

But in one scene, the Coors Light takes the microphone and cuts a track, rapping, “They call me Hollywood,” in what is most definitely Ice Cube’s voice, proving that this is merely a product of his Space Dementia.

Presented in this order, Ice Cube’s cinematic journey gifts the audience with not only a series of excellent movies, but also the tragic saga of a man who lost everything, his struggle to get his life back, and his ultimate descent into madness. It’s a work of true genius and puts every other cinematic universe to shame with its airtight narrative.

Ice Cube deserves an lifetime achievement Oscar for the unbelievable effort he has made to simply tell one good story.