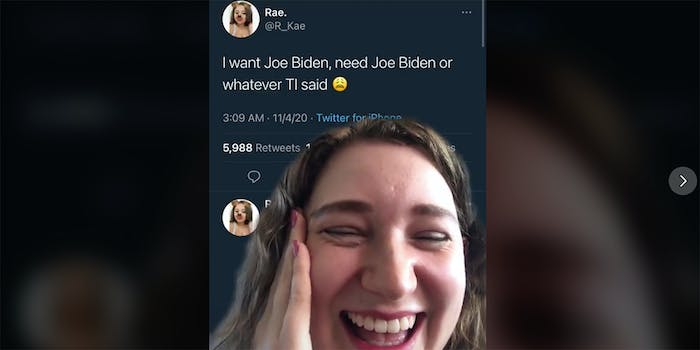 A TikTok video by Nicole Martin (@thedisappointedgoddess), based on a 3am Election Night tweet from @R_Kae, is going viral for a hilarious and topical misheard lyric. The line, from T.I.’s 2008 song “Whatever You Like,” is relayed as “I want Joe Biden, need Joe Biden.”

The video came as votes were being counted for the second day in the 2020 U.S. presidential elections. As of 5pm CT Wednesday, a winner had not yet been called in the race, though Biden has the more likely path to 270 or more electoral votes, based on the vote totals in the states still counting.

The video places the tweet in the background, which reads, “I want Joe Biden, need Joe Biden, or whatever TI said.” Martin covers her mouth with her hand and then lets out a hearty laugh as the part of the song referenced plays.

The lyric, from a song on the Paper Trail album, actually goes, “I want your body, need your body,” but the alternate hearing is certainly possible. It’s already been entered on KissThisGuy.com, an online archive of misheard lyrics, back in November 2008. That was, of course, the month that Biden became vice president, running on Barack Obama’s winning presidential ticket.

In the national popular vote, according to an NBC News article posted Wednesday afternoon, 67.7 million Americans expressed they wanted Biden, with another 25 million votes remaining to count.