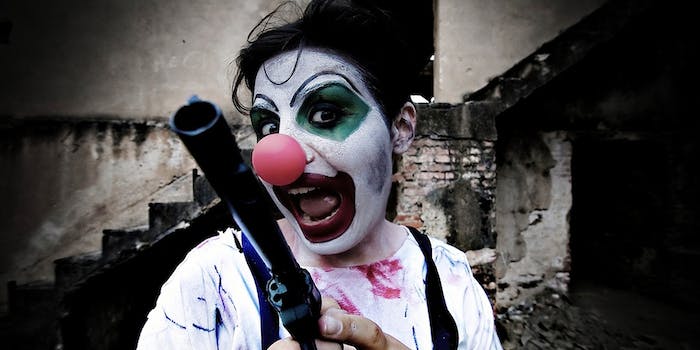 Why I hate April Fools’ Day

“Are you sitting down?” It was my mom on the phone. I was away at college in Tennessee. This probably means that I had blue hair and that my dorm voicemail greeting was the entirety of Anything Goes. I do recall my mom saying those words and how I gripped the chair in front of me, already in a panic. Because when someone somberly asks you if you’re sitting down, they are usually going to give you awful news.

“Your grandfather’s dead.” My heart careened down to someone just above my sphincter. I felt the blood rushing in my ears, an internal ocean. My grandfather was old, but he’d been, at that point anyway, relatively healthy.

I promptly burst into tears.

April Fools’ Day is the worst. I hated it before my mom made the worst joke of all time, one she still apologizes for, to her credit. I’ve got two little brothers and a particularly devious little sister, which meant that I spent a large portion of my childhood being wildly terrorized by their practical jokes.

That said, what exactly is practical about coating my doorknob with toothpaste, busting out of a closet to scare the shit out of me whilst I played “bunny ranch” with my Barbies, and/or hiding in the underbrush and convincing me that I was engaged in a call and repeat with a nearby bird, I could not tell you. I hated it. AND WHY WOULDN’T I?

There is nothing funny about jokes that make you feel hurt, embarrassed, shocked, or scared. Period. I can feel a nation rolling their eyes at me, but I stand by the sentiment. I would never ever fuck George Clooney. Not because he’s married, and not because he was a serial womanizer, and not because I couldn’t stand the pressures of fame (give me that please), but because I honestly think his well-documented passion for pranks would cause my clitoris to retract, never again to return.

Last year, I even considered ending my life-long passion for David Bowie when he fake-announced that he was going on a farewell tour. Mean, David Bowie! What is funny about announcing plans to share your magnificence with the world, getting your fans amped and then being all, “Ha ha ha you foolish fools! I WILL NOT BE DOING THIS THING I SAID I WOULD BE DOING.”

At their best, April Fools’ pranks are just dumb. Most of my friends know of my virulent hatred of the tradition and avoid going after me in such a fashion on the day in question. But I still have to soldier through my inbox, which is usually replete with companies thinking they are being so clever by being like “we’re going out of business!” or “look at this wacky new invention!”

Admittedly, this could be the bitter vitriol of a person who is easily convinced of things—gullible, if you will. But I’m choosing to make it a feminist issue: We live in a world where women spend a good portion of their lives trying to get people to respect them and take them seriously. Call me crazy, but I’m not going to chortle along at some holiday that gives folks an excuse to be condescending poops and undermine me and my fellow ladies.

I know, I know—that’s pushing it. But I can’t help it. In order for the most common of April Fools’ day jokes to be successful, they’ve got to be perpetrated by someone you trust. The entire conceit rests on the fact that you don’t believe the person deceiving you would ever in a million years violate your trust. How is them doing so in any way funny? Because of this holiday, I feel like we are officially allowed to claim that we have trust issues.

If you are going to do something stupid to someone on April Fools’, have it be actually stupid. Exhibit the “too much tuna” gag from Kroll Show. That is stupid. That is funny. No one is being undermined, except for maybe the tuna itself.

I just went and researched the origins of April Fools’ day to make sure that I wasn’t being a turd about a holiday with actual significance and am pleased to announce that this is not the case. We have a mistranslation of Chaucer to blame for that time your boyfriend made it seem like he was going to propose and then just tied his shoe. That’s right. This is all Chaucer’s fault. In The Canterbury Tales, there’s a story set on April Fools’ where a cocky cock (literally) is tricked by a foxy fox (also literally). Let the pranking begin, thought some scholar who didn’t look closely and, thus, missed the fact that Chaucer was talking about a day in May.

To sum up, I will be locking myself down in my home and looking askance at every email that arrives in my mailbox and this stupid non-holiday is to blame.

Photo via GigiPeis/Flickr (CC BY 2.0)