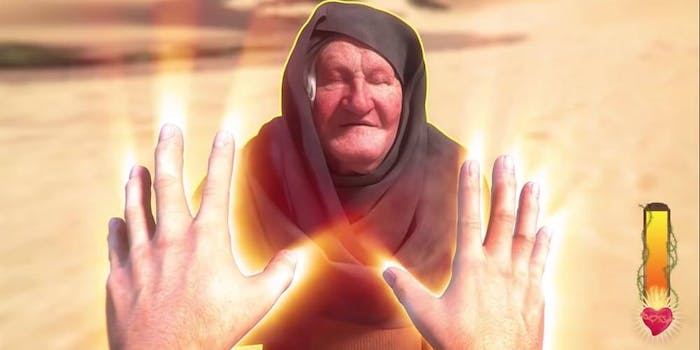 'Bruh how you supposed to beat the cross level?'

A new video game based on Jesus Christ is in the works, and everyone online can’t seem to stop talking about it.

A trailer for the game, titled “I Am Jesus Christ,” was released on Twitter last week and immediately spurred confusion and jokes among video game enthusiasts.

I Am Jesus Christ is a real game based on the New Testament. Watch the announcement trailer here: pic.twitter.com/Sh45IhAlI0

A description for the game, set to be released on the online gaming platform Steam, states that players will follow the religious figure all the way from his baptism to the resurrection.

“Become Jesus Christ, the famous man on Earth—in this highly realistic simulation game,” a garbled description states. “Pray like Him for getting superpower, perform famous miracles like Him from Bible like casting demons, healing and feeding people, resurrection and more in ‘I am Jesus Christ.'”

A Jesus Christ video game seems strange for numerous reasons. Not only because the storyline is predictable but because you’ll be playing in god-mode by default. Hardly seems like a challenge.

“Bruh how you supposed to beat the cross level?” Hunter Radesi asked.

Bruh how you supposed to beat the cross level?

Others jokingly posted “leaked screenshots” of the game, highlighting some of the most over-the-top Jesus-related imagery on the internet.

Leaked screenshots from the artbook seemed to spoil some crucial scenes in the game. pic.twitter.com/jPRGMFF2bj

Twitter user ZottSA was especially excited to portray Jesus so he could “steal some dude’s heroin.”

I’m excited for the part where you get to steal some dude’s heroin. pic.twitter.com/6prvkPPiLW

As always, some internet user had to spoil it for everyone by revealing the game’s shock ending.

“I heard a leak that the main character dies,” another Twitter user wrote.

I heard a leak that the main character dies

Wow, they just spoil the ending right in the trailer. Dropped.

Even Jesus himself weighed in, metaphorically scratching his head at the bizarre depiction.

Many just weren’t having it, though, pointing either to major flaws in the game’s premise or just the overall cringe factor.

“Valid criticism about how the leveling system is broken… start out with max power, max knowledge, basically invulnerable,” Buford Montessori wrote. “Playing an entire game on godmode is self-indulgent at best and tiresome at worst.”

Valid criticism about how the leveling system is broken… start out with max power, max knowledge, basically invulnerable… playing an entire game on godmode is self-indulgent at best and tiresome at worst

Actual Christians also questioned whether the game was blasphemous or worth buying.

As a Christian myself, I don't know what to say about this game. Honestly I am surprised this is a thing. pic.twitter.com/5dA7Z2uNPU

Not psyched about the gamification of my faith.

Perhaps one of the larger questions was why Jesus, a Jewish guy from the Middle East, looks so white?

How is Jesus and all his disciples paler than me

Why is he white

That is one snowy white Jesus.

It currently remains unknown as to when the game will become available. The game’s publisher, PlayWay S.A., claims the adventure is “coming soon.”