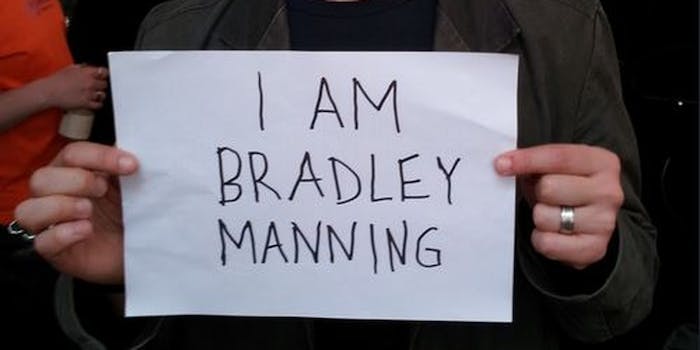 These celebrities are all Bradley Manning

A star-studded campaign aims to convince the government to drop an aiding the enemy charge against the Wikileaks whistleblower.

The trial of Bradley Manning has now gone on for over a week, after three years of pre-trial detention. Manning is the U.S. Army private who handed over 700,000 restricted documents to WikiLeaks.

Manning faces life in prison for just one of the charges he is facing, aiding the enemy. The crime is a capital one but the prosecution announced early on their intent not to seek the death penalty.

Many feel the private, who elicits sympathy from many due to his awkwardness, apparent sexual confusion and harsh treatment while in detention, is more a victim than a perpetrator.

He has arguably assumed figurehead status for everything from Guantanamo to Abu Ghraib to the NSA’s Boundless Informant. In short, all of the untoward actions and decisions of a government that appears to have left its guardianship of civil liberties in its rear view.

Those feelings have given birth to I Am Bradley Manning, a Tumblr campaign to encourage the prosecutors to drop the aiding the enemy charge. The campaign, anchored by celebrities such as Russell Brand, Phil Donahue, Maggie Gyllenhal, Oliver Stone, and other “#notables,” features self-posted photographs of supporters holding signs that read, “I am Bradley Manning,” and variants thereof. (A number of celebrities appear to have surprisingly similar handwriting.)

“The information that Bradley gave to the public,” reads the explanation, “has been a catalyst for pro-democracy movements in the Arab world, exposed the unjust detainment of innocent people at Guantanamo Bay, shown us the true human cost of our wars in Iraq and Afghanistan, and changed journalism forever.”

Photo via I Am Bradley Manning