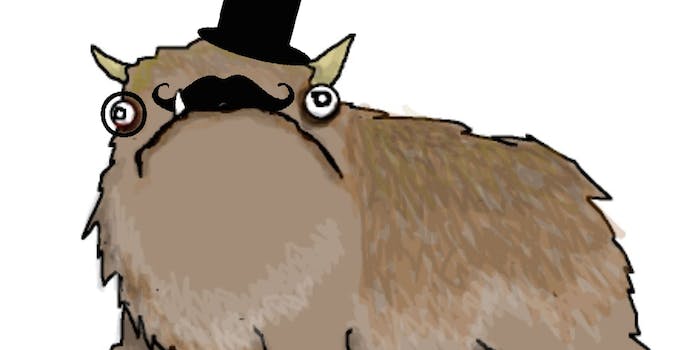 Hyperbole and a Half is a book, and “Alot” of us can’t wait

Without so much as a whisper from its main blog, Allie Brosh's upcoming book adaptation is already at No. 10 on Amazon’s comic bestseller list.

Webcomic Hyperbole and a Half may not have been updated since 2011, but it’s still going strong. Without so much as a whisper from its main blog, Hyperbole’s upcoming book adaptation is already at No. 10 on Amazon’s comic bestseller list—and that’s just from preorder sales.

Written by Allie Brosh, Hyperbole and a Half is part blog, part absurdist comic drawn in MS Paint. Even if you haven’t read it, you’ve probably seen its influences online, from the mythical Alot (a monster inspired by the common mistake of spelling “a lot” as a single word) to the phrase “Clean all the things!” The adorable Alot has become a kind of mascot of Internet typos everywhere, recognizable enough that it’s turned up everywhere from Twitter fan art to a carefully sculpted snow Alot (“Alot of snow!”) in Sweden.

But one of the most popular Hyperbole posts is on a topic not usually associated with funny webcomics about dogs and typo puns: coping with mental illness. In “Adventures in Depression,” Brosh spoke candidly about her own problems with clinical depression, inviting thousands of comments from well-wishers and readers who wanted to share their own experiences. It’s this mixture of candidness and humor that’s kept her fanbase going strong in the long wait for new updates.

As for her upcoming book, Brosh has already shared a little of what’s to come. While we’re sure to see some old favourites such Brosh’s backstory as the worst child in the world, there will also be a lot of new content. As she wrote in the book’s original announcment:

“The book will contain roughly 50% new material. The other 50% will be posts I’ve published on this site already, but some of the posts that did not previously contain illustrations will be illustrated. It will be basically just like my blog in book-form (illustrated short stories, guides, etc.)”

Hyperbole and a Half: Unfortunate Situations, Flawed Coping Mechanisms, Mayhem and Other Things That Happened will be out at the end of October, and fans are already awaiting it with bated breath. A photo of the manuscript was received with jubilation from Reddit users, with Hyperbole readers glad to hear anything from Brosh, even if it wasn’t a blog update. After almost two years of radio silence, several fans commented to say they were happy just to hear that she’s still alive, never mind publishing a book.