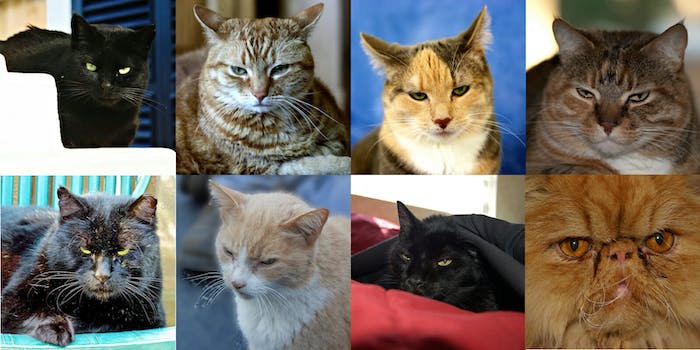 If you’re of the opinion that dogs are always happy and that cats don’t want to hear any of your bullshit, consider the case of these two pets made famous by Hurricane Harvey.

You probably already know about Otis, the dog who was spotted gallivanting around Sinton, Texas, with a bag of dog food in his mouth, ready to take on the world despite the constant downpour. He’s a good dog.

But had you heard about this cat, snapped by Getty Image photographer Scott Olson, as the animal swam through floodwaters to presumably try to find a dry spot? The cat is resilient, and there’s little doubt that it’s a feline badass and a meme in its own right. But man, do not even think about going near it.

A cat swims for dry ground after an apartment was inundated with water following Hurricane Harvey. pic.twitter.com/kVj0B3Waow

That right there is the anti-Otis. That cat is furious with Harvey, with the water, and, perhaps most dangerously, with you. Because you’re looking at it and taking a photo. It looks like it wants to bat your head around like it’s a ball of yarn and then use your body as its own personal litter box. As the internet was quick to note, the cat looks beyond pissed.

Badass Harvey Cat had "one f— to give, and that f— is gone."

Whoever wrote this deserves a Nobel Prize pic.twitter.com/h9pUfcLx0d

Beyond the obvious explanation—that the cat is having to swim for its survival—there is another reason the cat might look so ornery. Where’s the help when the cat needs it most?

As for the photographer who took the picture, it sounds like he knew better than to approach that cat. Thus, we don’t know what happened to it.

You may not like Hurricane Harvey cat. You may straight-up hate it. But goddamn it, you have to respect it.