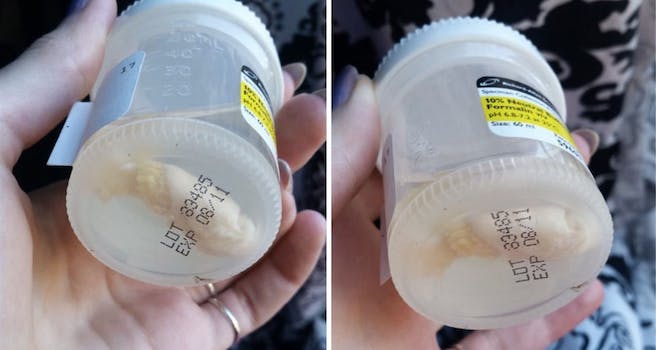 People are freaking the hell out.

If you thought nothing on Tumblr could surprise you after the January incident with the grave-robbing bone witch, here’s some uplifting news: 2016 isn’t over yet. Hope you like severed toes!

While people on Twitter cycle through endless political arguments and Facebook users spread fake news, Tumblr has been captivated this week by a different kind of human drama: One user sent a single human pinky toe to another, and it might get turned turned into a sparkly necklace.

Everyone’s reading posts from the new owner of the precious pinky, preserved in a jar of formaldehyde, and wondering “What the fuck?”

Hi, good morning, can someone please tell me what the fuck I just read pic.twitter.com/OrqUZKvLpy

What’s happening is a little weird and creepy, but it’s apparently not as dark as you might be imagining when you hear a story about someone wearing someone else’s severed toe.

The pinky in question belonged to Tumblr user Royallyoily, and according to its new owner, Tumblr user cummy-eyelids, it was surgically removed more than 10 years ago.

“She had it amputated for medical reasons nearly a decade ago, i’m just helping her keep it preserved and making it into jewelry for her,” cummy-eyelids wrote, shutting down rumors that she “got a girl to cut off her toe” for her.

Cummy-eyelids says Royallyoily had kept the preserved toe for “spiritual reasons,” but eventually decided to give it to someone who could properly care for it… by turning it into wearable art.

“Literally brought tears to my eyes. I am so grateful and excited myself,” Royallyoily wrote.

“Not only do I absolutely trust your artistic expertise @cummy-eyelids but I also feel my body part (yes an actual piece of me) could not be in more capable hands. I know you will respect and care for my little piggy. I appreciate this more than you’ll ever really know!”

No self-mutilation going on here, just medical procedures and some very unusual art. As far as plans for the toe necklace go, cummy-eyelids says she’s going to “keep [the toe] as a wet specimen,” but “my other idea was mummifying it then electroplating it with like copper or gold and having crystal clusters coming out of it “

To each her own, I guess, but people on Tumblr are flipping out about this toe business. For some strange reason, not everyone thinks sending someone your own toe is normal behavior.

All of tumblr is having a meltdown about this toe thing jesus fucking christ pic.twitter.com/tWptQKOsxs

There’s also a lot of “wat,” the crying laughing emoji, and some mockery of the sentence “I absolutely trust your artistic expertise, cummy eyelids” (which, to be fair, is one hell of a sentence in any context).

Best of luck to oily, cummy, and the poor, blameless severed toe that’s going to end up crystalized or something.