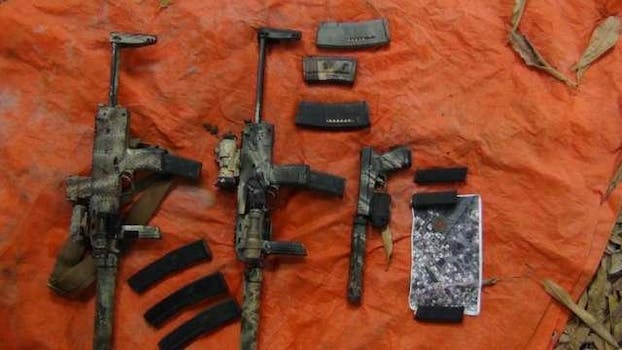 The group HSM claims the body is of a French operation commander.

French forces raided militants who fight under the banner of Harakat Al-Shabaab Al Mujahideen (HSM) on Friday, in a failed attempt to rescue an agent captured in 2009. HSM, an Al Qaeda-affiliated group, operates in much of southern Somalia.

In response, @HSMPress, a Twitter account that is purportedly the official voice of HSM, has tweeted a several pictures of a dead Western soldier.

The pictures (which, be warned, are disturbing) show a man’s body, laid out with weapons and with a silver cross prominently dangling from his neck. “A return of the crusades, but the cross could not save him from the sword,” HSM tweeted.

Another photo openly taunted France’s president, asking, “François Hollande, was it worth it?”

“All avenues for negotiations were open, but France chose treachery over negotiations. It failed, & it failed miserably. Well, C’est la vie!” the account added.

The body is of the operation’s commander, @HSMPress claimed. In flawless English, it went on with an official press release:

The commander was deserted by his comrades after a fierce firefight and subsequently captured by the Mujahideen. HSM paramedic teams arrived at the scene shortly after the firefight had ended and transferred him to a hospital at the base, but he succumbed to his injuries hours later.

France said the fighting left at least two Frenchmen dead and a third missing, and killed 17 HSM soldiers. According to the BBC, the operation left a number of civilians dead. @HSMPress didn’t offer exact numbers, but said “several” French had died, and that they had the missing soldier in their custody.

On Tuesday morning, the account defended decision to tweet the graphic photos: “When one of the Mujahideen leaders is killed, the news gets favourable covarage in the media, a kafir is killed & it’s labelled ‘repugnant,'” it posted. “Publishing the image of the French commander was timely and of significant news value.”