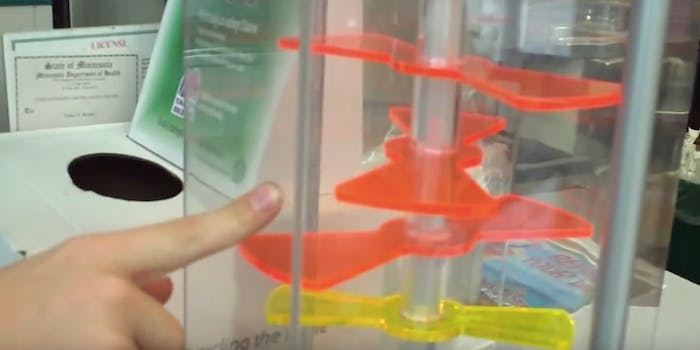 Why didn't we think of this?

If you’ve ever been to a Taco Bell, you’ve likely subjected yourself to their little coin-drop game contraption in hopes of winning some food for a small amount change. Its simple setup and bright colors give the impression that it’ll be easy to score a 25-cent soft taco, but then reality hits you, and before you know it you’ve wasted a dollar and triggered a gambling problem you never realized you had (and you still haven’t ordered any food).

Well, thanks to this kid, the next time you attempt to win some food for cheap, you’ll actually win. Dude shows you an optimal winning strategy, explaining everything from which slot to drop your change into to maneuvering the platforms so your change will fall on that sweet yellow plank. All so you can proudly tell that Taco Bell employee what type of taco you want as they think, “Wow, I can’t believe someone beat it.”

Granted, this video was uploaded back in 2008, so maybe the heads over at Taco Bell caught on and tweaked the devices. But on the off-chance that they didn’t, follow this kid’s advice and ideally you’ll join the ranks of people who’ve actually fed themselves by besting this thing.Photo via Jawa044/YouTube