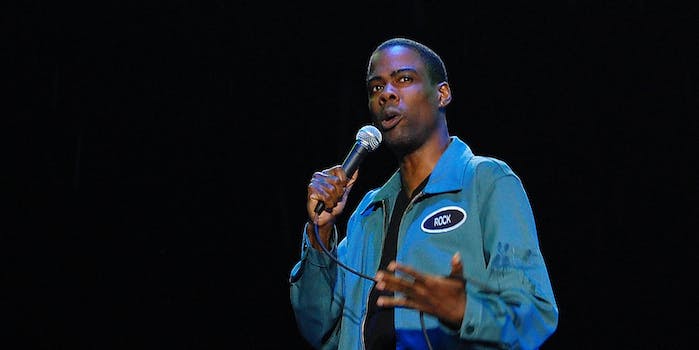 Race jokes aren't taboo, you just have to learn how to make them.

When you’re white, it can be difficult to make a good race joke. When is a joke funny and appropriate, and when it is just plain racist? Sometimes it’s obvious—the Ohio cop who “joked” about hating “N-words,” for example. Not funny. Sometimes it’s less obvious, and insidious racial jokes are almost more of a problem. We can all identify and condemn a blatantly racist joke, but a quietly offensive joke may come with a hidden payload that reinforces racist attitudes.

When it is acceptable for people to make racialized jokes, and when we’re joking about race, how do we do it right? There’s no convenient, scripted formula for successful racial joking, but I can give my fellow white people some easy tips on knowing when, where, and how to get it right.

In-group humor is very different than out-group humor. Some racial jokes, like those made to great effect by Chris Rock last week, like those made by Elon James, like those made by other great black, Latino, Asian, Middle Eastern, and other comedians of color, only work because of the race of their creators. Such jokes are funny because they’re about internal lived experiences and racism—they don’t work when they come from a white person, and actually just come out sounding racist. (No, you can’t just repeat a joke you heard on a black man’s late night comedy routine.)

For people who belong to non-white racial groups, decisions about how and when to make jokes about members of other races are a bit more complicated, and not for this cracker to dictate. “Reverse racism” doesn’t exist, but intra-people of color racism does, and it can be difficult to toe the line between commonalities of experience and solidarity versus racism; a black woman making an Asian joke, for example, could be engaging in anti-Asian racism or could be having some fun with a shared experience. The distinction between “racial” and “racist” can be hard to find.

Jokes about social issues work best when they punch up—they make a comment about society, rather than reinforcing a social problem. When you make a racialized joke, make sure that the butt of the joke is racism and racists, not those who suffer as a result of racism; think literally of “punching up” at racism. Lazy Mexican jokes, not so great (unless you’re Mexican and you’re making an in-group joke). Jokes about how white people in the U.S. exploit Latin Americans for cheap labor, and how that reflects on society, leave the listener amused, but also thoughtful.

Race jokes should read as funny not because they’re built on exploiting stereotypes and racial hatred for easy amusement, but because they comment on race relations in this country, they make a marked social observation, or they say something about the dynamics of a situation. If a joke is just designed for cheap laughs at the expense of non-white people (punching down), it’s not really an effective race joke.

3) Who initiated the joke?

Your black friend may be laughing uncomfortably at a joke you told, but that doesn’t mean she thinks it’s funny. In fact, she may write an op-ed for the New York Times about exactly how uncomfortable and betrayed it made her feel. That’s because even though you may have a friend who’s a person of color, that doesn’t give you carte blanche to make racial jokes. They’re only funny is everyone is laughing, as in actually laughing.

If she initiated the joke, though, the dynamic changes. She’s inviting you to share in a moment of humor that may explore your relationships to each other and society, and she’s also probably just trying to get you to laugh. A racial joke reads very differently when it’s initiated by a person of color, even if it later becomes cooperative. And if it makes you feel a little uncomfortable, maybe it’s supposed to. Sometimes that’s the point of a joke, because humor may do what other forms of communication do not, creating common ground for talking about issues.

Ultimately, she also gets to decide when the joke is not funny, too. Sometimes joking between friends goes over the line. Body language and other cues are usually a good sign that people have stopped enjoying themselves. If you can’t identify the moment that happens, she will, and pay attention when she says so.

There’s a huge difference between your living room, your Twitter feed, and the stage at a large public event. Even if you pride yourself on living out loud, things read quite differently depending on video. Maybe you and a Chinese friend joke around about her being a “banana” when you’re together in an intimate setting, in a joke that she initiated and she gets to call the shots on, but that joke doesn’t fly when you’re on Twitter making a comment about how @susieqyourfriend is such a banana—or when you’re introducing her on stage and you crack a joke about how she feels assimilated by American culture.

Before you make a joke, think about where you are and how jokes will be read. If you think someone in the audience will be offended or will feel unwelcomed and alienated by the joke, it’s probably not the right venue. No biggie—you and Susie have plenty of time to joke later. Not all places are appropriate for all jokes, and that’s OK.

In the tried and true adage that “if you have to ask” if a joke seems like it might be racist, it probably is. Intention is meaningless in these cases, because what happens as a result of jokes is about effect, not what you may have been trying to do. Maybe the room laughs and everyone has fun; maybe people feel awkward and uncomfortable.

When race jokes fall flat, it’s not just because they’re not funny. Failing at a joke is awkward and embarrassing. Telling a joke that people dislike because it’s racist transcends to an entirely new level, though, making the surrounding crowd feel uncomfortable and unhappy. Telling jokes should be fun and entertaining, and a joke can definitely explore racial elements without reinforcing racism.

Before you wisecrack, take a minute to unspool what you’re about to say, and to think about its implications. (This is even easier when you’re preparing remarks, a speech, or another rehearsed set of comments.) Pick through it, think about how the audience will respond, and then decide if you really want to go there. In fact, honestly, if you have to ask whether you should “go there,” you might want to consider not. Going there, that is.