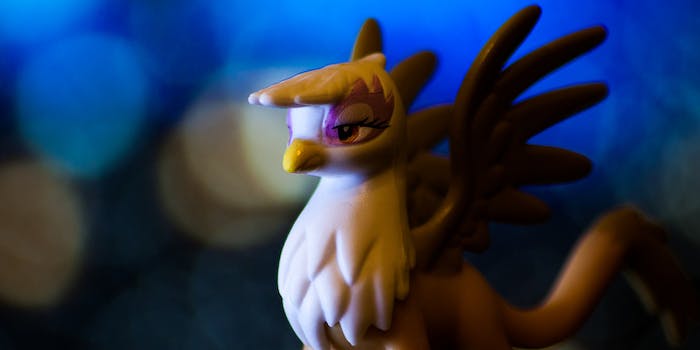 The "My Little Pony Backpack" story caused me to reflect on my own son and his complicated relationship with gender.

Five weeks ago, I saw a headline about Michael Morones, an 11-year-old boy who liked My Little Pony and tried to hang himself. I felt like I was propelled into my worst fear. Michael’s story was instantly seared into my memory. As I read how his parents described him, they might as well be describing my son. There is less than two years between them and the endless similarities scared me to my core.

There are a growing number of families rallying around, supporting, and defending “Pink Boys,” and my family is one of them. Pink Boys, generally, identify with their biological bodies and whose gender expression is more feminine (i.e., activities and clothing). We have the best of both worlds with Morgan. He loves Legos, ballet, fashion, Minecraft, super heroes, art, and wizards. The main reason Morgan differentiates between boy and girl is because he’s been told there is a difference in our culture’s gender binary system.

Morgan came into the office while I was reading the Morones’ story including a picture of Michael in a hospital bed wearing a neck brace and I couldn’t close the webpage in time. “Oh, does he like My Little Pony, too? How cool!” I was so engulfed in my own emotions. I couldn’t ground myself fast enough to deflect the severity of Michael’s situation. As a parent, I wanted to rip the computer screen from the wall and smash it. My rage surprised me. How the hell can I protect my child from a blanket of ignorance? First and foremost, it is my main responsibility to keep his soul safe. The gender binary has become the big, bad wolf.

My greatest fear for Morgan is suicide. Because of our society’s narrow beliefs on masculinity, a child like Morgan is at a high risk. Within this system, gender non-conforming youth are met with a barrage of nonstop messages of why they are wrong, broken, evil and weak, less than, and not equal to the rest of “society.” It’s a very real fear of mine that Morgan’s sense of self will be cracked as a result.

My general policy is to be honest with Morgan because my experience of adults growing up didn’t instill a lot of trust. So, I probably swing that pendulum a little farther. Recently, I’ve reflected on how unstoppable I could have been if I didn’t buy into the limitations put on me by those around me. When I became a parent, I committed to myself and my son that he would not grow up feeling less than. Ironically, I never factored gender non-conforming into the mix.

“What about Morgan’s dad, how does he handle it?” Since this is a frequent question, I’d like to share that Morgan’s father is beyond supportive, encouraging, and utterly accepting of all that is Morgan. There has never been a time when my husband hasn’t stood behind our son 1,000 percent; even through his own fears for our child. He’s automatic response when people ask “How do you handle it?” is “Handle what? Morgan is a happy, successful, loving child. Why would I try to change him or take things away that bring him such joy?”

Admittedly, the fathers of these gender non-conforming children aren’t being heard or represented in this conversation. We need more men to stand up and speak out. I dream about a grassroots movement of strong, beautiful, loving, and compassionate men shattering the stereotypes of what is means to “be a man.” I can tell Morgan how amazing he is all day long. But, if he doesn’t have male role models to look up to, my efforts are superficial.

For the past three years, we have watched Morgan’s gender expression shrink, shift, and adapt as a form of self-defense. For 18 months prior, he grew his hair out and wore it in a ponytail, with barrettes, or hairclips with joy. He went through a pair of pink and silver sparkly TOMS shoes, became obsessed with colorful skinny jeans from H&M, and alternated his glittery and cotton candy pink bow ties. (Tim Gunn would eat this child’s fashion sense up!)

Unfortunately, both boys and girls judge, tease, or just avoid him because of how he dresses. I would be lying if I didn’t admit to staring down kids and adults who’ve stared with rude expressions at Morgan. The craziest thing is that, for years, Morgan hasn’t outwardly shown any signs that he notices how people react. It’s incredible and worrisome at the same time; either he’s truly oblivious or he’s stuffing it inside.

For Valentine’s Day, I bought Morgan a My Little Pony belt as a surprise that thrilled him to no end. Less than a week later, I read about Michael. At the age of nine, we have had now had our first conversation about suicide. It seems surreal to me as I write that sentence. I cried, was terrified of saying too much, and not enough all at the same time.

A mental image of Michael Mornones hanging himself is seared into my psyche. The desperation, anger, heartache, loneliness, and isolation that Michael must have been feeling is unimaginable at the age of eleven. I have dealt with depression at several stages throughout my life—suicidal thoughts, an attempt in my twenties, and a long stent with post-partum in my thirties. I know the desperation to end the pain and suffering with no end in sight. Imagining Morgan feeling this way is suffocating.

I cannot control the future, as much as I may try. There are no guarantees Morgan won’t come to the same place Michael did. As parents, we can’t stop the criticism, judgment, or isolation from peers and society. I am endlessly inspired by Morgan’s level of compassion, kindness, and love. We can surround Morgan with a village of people to fill him with love, respect, honor, courage, trust, honesty, and compassion so he can take on the world as Morgan.

Protecting that has become a driving motivator.

I am endlessly inspired by Morgan’s level of compassion, kindness, and love.

This article was originally featured on The Next Family and the Good Men Project and republished with permission. Lisa Keating is the mother of a gender non-conforming boy who has inspired her to explore gender expression and identity. For more information on her work, check out My Purple Umbrella.