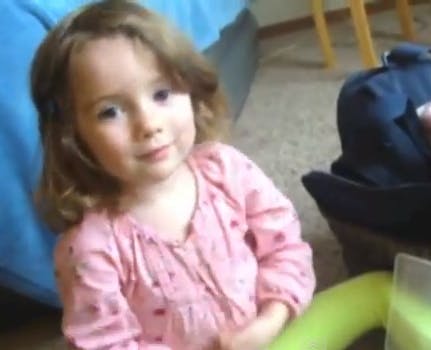 How to pack for vacation—according to Annika

Another valuable life lesson from the cutest how-to instructor on the Internet.

She has taught you how to pick up a chicken. You’ve learned how to ride a skateboard—or something like that.

In the latest installment of the toddler’s adorable how-to series, Annika makes a list, checks the weather, pulls her clothes off their hangers, and packs her essential toys and hair clips. But like her previous hits, it’s not what she does, but how she does it that makes the video so adorable.

At one point, Annika “teaches her bangs a lesson” and proves she knows her dinosaurs better than you do. (That’s a pachycephalosaurus, really?)

“I was trying to let her take responsibility for packing her own suitcase and it was just really cute watching her mimic me, so I emptied her bag and started over, with the camera on,” recalled mother Britney.

“It’s longer than the others, but I cut out as much as I could!  My husband had to do some extra deleting because I couldn’t bear to do it myself.”

Since the Daily Dot discovered the series last week, How-To with Annika has achieved some micro-Internet fame, getting picked up by The Daily What, among others. Good Morning America reached out to the family, as did the burgeoning YouTube production company, AwesomenessTV.

“The exposure has been a shock just because of how fast it happened,” Britney told the Daily Dot. “Her ‘How to Pick up a Chicken’ video went from 200 views to 20,000 views in a day!  A friend texted me and said that Alyssa Milano had ‘favorited’ your tweet, and my husband’s response was, ‘Wow! That mean’s she’s seen me, too.’  He’s in the video for about two seconds.

“The best and most surprising part of the experience has been the personal feedback I’ve received. I’ve gotten emails and comments from other Christian women who found our family blog through watching Annika’s video. The Internet can be so full of awful and damaging things, so any time it serves to connect and encourage people and build community between people who would otherwise never meet that’s awesome.”

Here’s hoping the family continues to share its daily lessons. YouTuber xNanakax put it best in the comment section, “I have much to learn from her.﻿”